Don't Be Sad, Be Happy It Happened 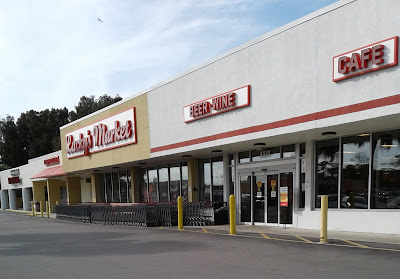 With Lucky's Market of West Melbourne officially closing on February 21, 2020, I feel there's no better time than now to finish the story of the closing of this store. Like last time, this post will be comprised to two sets of photos taken on two different occasions. Picking up from where we left off last time, we skip ahead three days to February 18, 2020. By this time in the closing, the closing sale had dropped to 75% off all remaining merchandise, the final price cut before the store closed for good a few days later. While the deals sounded good, there really wasn't much merchandise left to stock up on... 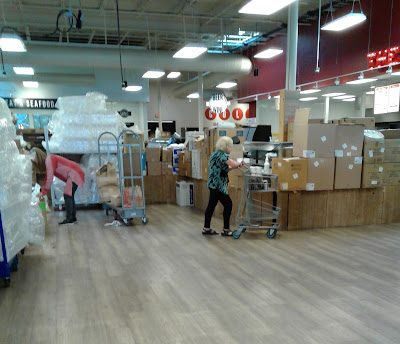 Stepping inside, what little grocery product was left was clustered to the left side of the coffee grinders. The groceries were very slim pickings, with the only food products remaining being some packages of spices and a few barrels of bulk dried black eyed peas. Outside of that, there was still a small selection of apothecary items, and a lot of random store supplies (pictured above). 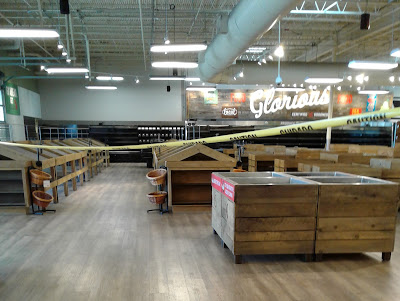 While some of these views are similar to what we've seen in the previous post, showcasing all the emptiness in the closed off sections of the store, I still took a few photos out this way. 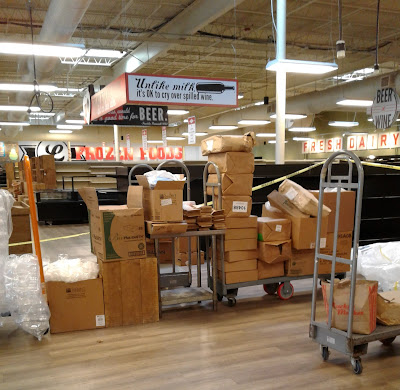 Unlike milk, it's OK to cry over spilled wine (and your local Lucky's closing). Besides that sign, behind the flatbed carts we see all the empty grocery aisles, as well as some of the other department signage poking out in the background. 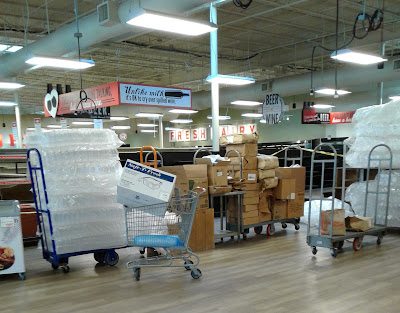 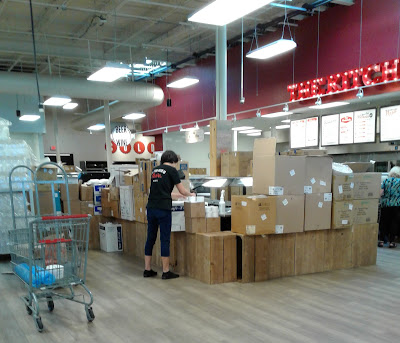 If you needed a 500-count box of plastic rotisserie chicken containers or a roll of produce bags, this was the time to stock up. The former prepared foods area was piled high with boxes of all kinds of store supplies and containers, primarily the containers used to package items once sold in this department. Unlike the actual merchandise, this stuff didn't seem to be moving very fast. 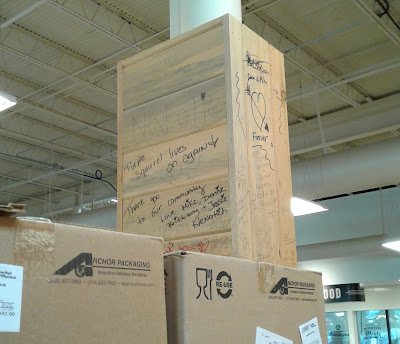 Hidden behind all the boxes of supplies was this pole, where Lucky's used to let people write little messages and such on. Peeking out over the boxes was a message that must have been added recently by the family of the store manager, saying "Thank you to our community.", a fitting farewell to the message pole. Along with that heartfelt message, we also know that "Purple squirrel lives on again." I have no idea what that second message means, but at least we are duly informed should that be important 😁. 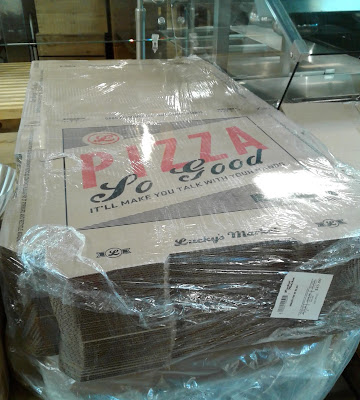 While all the pizza may be gone, there were still plenty of pizza boxes to be sold off amongst the random cases of store supplies. However, a stack of empty pizza boxes doesn't do me any good, as it's the stuff that goes inside one of these boxes that I'd want! 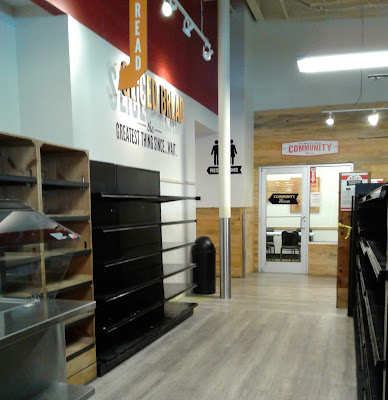 This photo was taken alongside The Kitchen, where The Kitchen joined with the edge of the Apothecary department. As you can tell by the signs, breads (including the sliced kind, which is the greatest thing since...wait...) used to be located along that wall to my left. In the background is the hallway to the restrooms, as well as Lucky's community room (where various classes and meetings would take place). 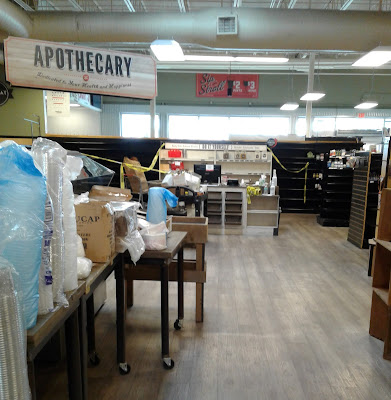 Turning away from The Kitchen, here's a look toward the apothecary. All the remaining apothecary merchandise was consolidated onto those black shelves to my right. 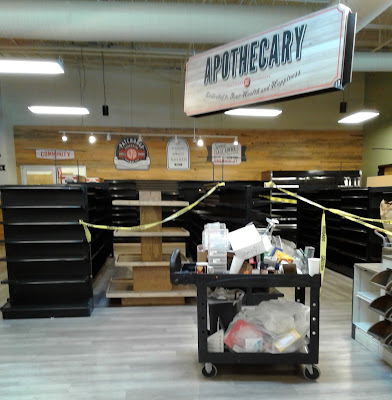 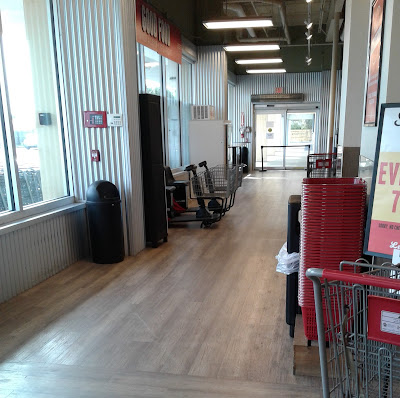 There wasn't much left to see here, so on my way out I took this photo of the hallway in front of the registers. I don't recall getting this view before on my visits here, so here it is. This space is Winn-Dixie's old vestibule area, which is visible in this photo. Looking at the photos from the original Winn-Dixie days and now, it's weird to think those pictures were taken in the same building! 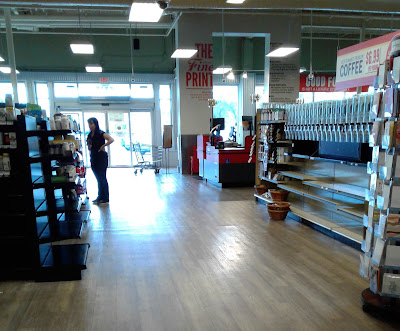 Here's one final interior photo from February 18, 2020, looking at the area where most of the remaining merchandise had been consolidated. 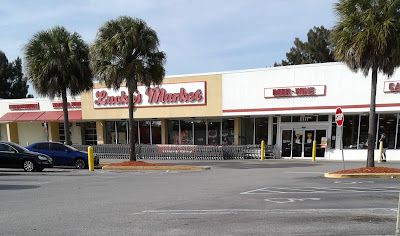 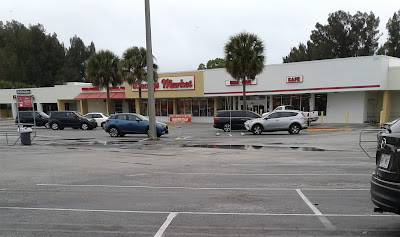 After visiting a few days earlier, I knew the end was going to come sooner than the originally anticipated final day of February 25, 2020. On a whim I decided to pay Lucky's a visit on February 21st to see if the place was still open, and it was - for only another 10 minutes by the time I got here! 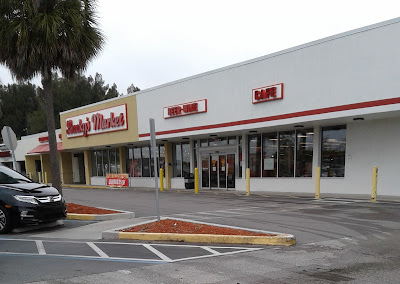 Usually timing like that doesn't work in my favor, but for once it did! I was actually planning to head over this way later in the day, but I'm glad I changed my mind when I did. Fittingly enough for a final day, the weather outside was cold, gray, and gloomy. While the weather outside could be described that way, the attitude of all the employees inside was surprisingly the opposite. The employees all seemed to be having a party in the cafe when I arrived, and were in really good spirits for being their last day employed. I'm sure on the inside the employees were sad, but they were making the best of their situation. 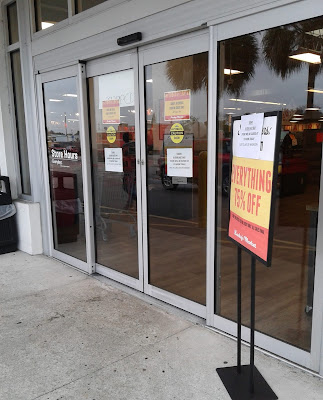 Signs were taped to the front door announcing February 21, 2020 as the final day in business. Since we're on a time crunch, I had to make my business inside quick... 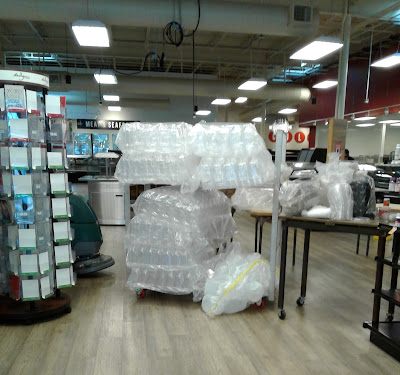 On the last day, what product remained inside was essentially the same we saw a few days prior. The main difference was the last little bits of grocery stuff were gone, with a small amount of apothecary items and cases of supplies floating around. That rack of cards also appeared on this trip too (although it could have been floating around somewhere on my other visits, but I never noticed it). 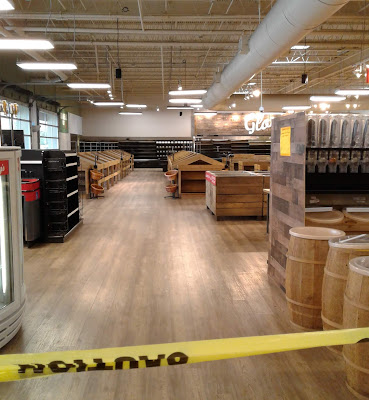 Besides one lady combing through the tiny bit of apothecary items remaining and another lady paying for her stuff at the register when I arrived, most of the people in here right before the closure were either employees or family members of the employees. They were all walking around, hanging out in the cafe, taking pictures and videos of the store and each other, and having a good old time as the final minutes neared. 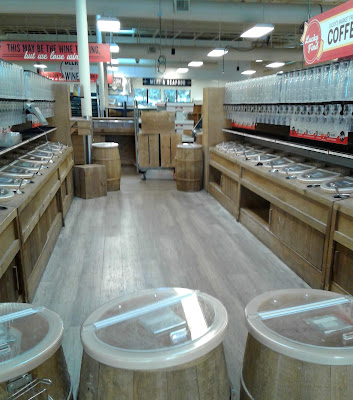 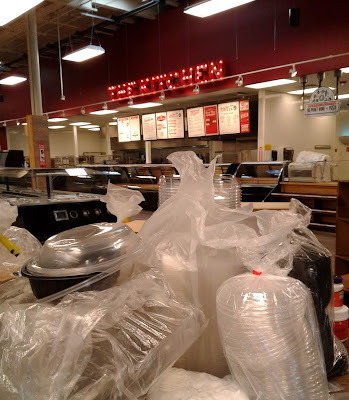 A parting shot of The Kitchen... 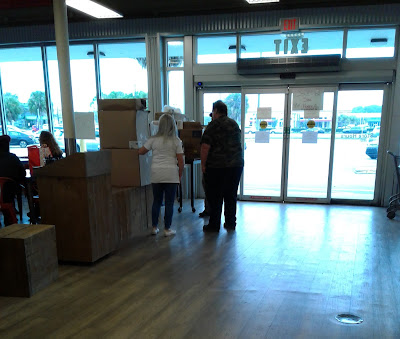 And my final photo taken inside Lucky's Market of West Melbourne, minutes before Lucky's Florida presence came to an end. 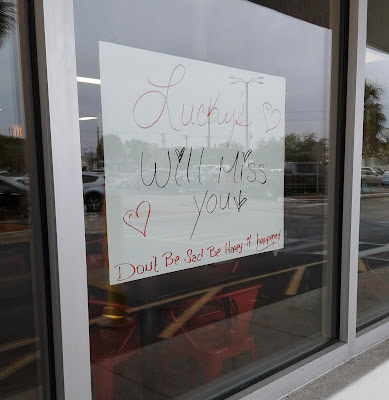 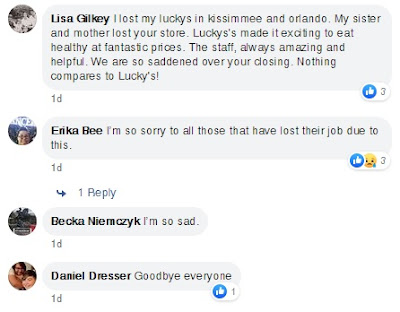 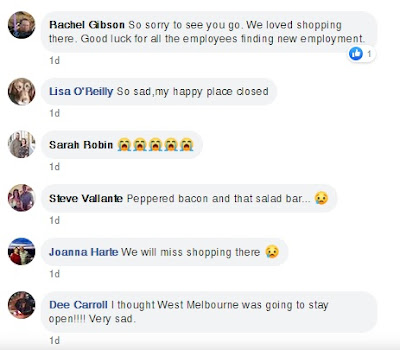 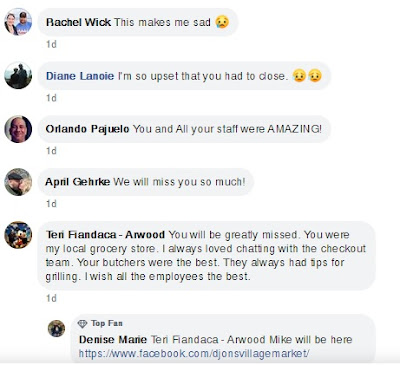 I pulled all these screengrabs from Lucky's Market of West Melbourne's Facebook page, specifically from the store's final post on February 21, 2020 announcing Lucky's was officially closed. That was just a sampling of the comments too, and not counting the outpouring of sadness on any of the store's previous posts during the closing process. In addition to the outpouring of sadness and well-wishing to the employees, anger toward Winn-Dixie could also be found in the comment section of those Facebook posts: 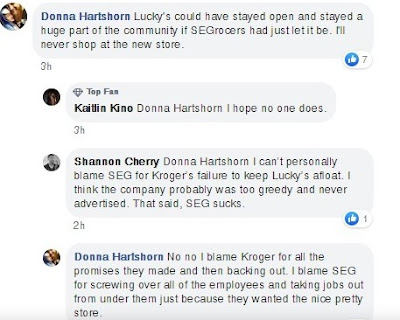 Again, that was just a sampling of the anger from locals that Winn-Dixie was coming back to this location, as there are other comments on the Facebook page with similar sentiments toward Winn-Dixie. People I've spoken to about the situation also feel Winn-Dixie pulled a dirty deed buying the West Melbourne store out from under Lucky's, and refuse to support the new store. I'm sure there are still a lot of people out there who are indifferent to the situation or don't care, but I've never seen so much emotion flying around in regard to a closing store/stores before than I've seen with the Lucky's situation (especially West Melbourne's case). It just goes to show that a store really can be thought of as more than a place to buy groceries, but a true asset to the community. 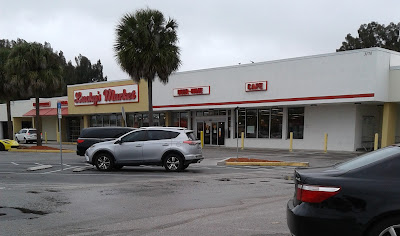 So folks, that was Lucky's Market of West Melbourne. Even though that finishes my coverage of the closing, that's only half the story. Sometime in the coming months we'll begin to see progress as the new Winn-Dixie begins to take shape. While I don't plan to cover the actual renovation of this building back to Winn-Dixie, I am extremely curious to see what the new store will look like once it's open, and how much of Lucky's layout is kept or changed. Winn-Dixie plans to open this store later in 2020, and I'll be sure to keep everyone updated on an opening date as I learn more.

However, before I end this post, I do have one more thing to add about Lucky's. I discovered recently that a new locally-owned organic market will be opening in the nearby city of Indialantic sometime in early 2020. The new market, called Djon's Village Market, will be located about 5 miles to the east of here on US 192, the same road Lucky's was located on. Djon's Village Market, which will be owned by local restaurateur Djon Pepaj, is being described as a "food mecca" with three levels and a rooftop bar, amongst other features. The manager of Lucky's announced he would be taking on the position of manager at Djon's Village Market, continuing his journey in the field of organic shopping. As manager of the new market, he plans to reconnect with many of the same local and small vendors who sold their products at Lucky's, so people living in the area could still purchase these harder-to-find items. The manager also extended out an offer to any Lucky's employees who wanted to make the transition to Djon's too, hoping to reunite much of the Lucky's crew at the new store. While Djon's Village Market will be different than Lucky's, at least some parts of Lucky's will continue to live on in Brevard County, even if it is indirectly.

That being said, to end today's post, I will turn the table to Lucky's themselves to provide us with some final words: 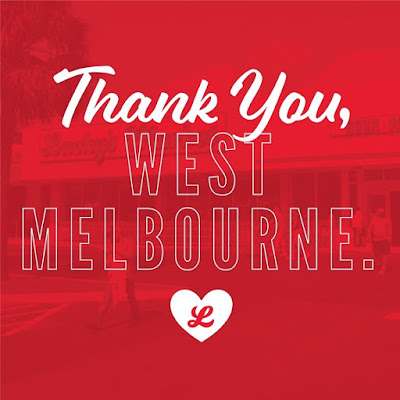 "We are sad to announce that our doors are permanently closed. We’re grateful for the support from this community, since opening our doors in 2017. What we built with you, our loyal customers, was not in vain. You helped contribute to our mission: Good Food For All. We appreciate all of the shopping trips you put in, the community organizations you helped us support and the friendships that we made along the way. We wish you the best, and an abundance of good food in your future."