In Rockledge, right off US-1, sits  a shopping plaza so dead it hasn't even had a sign for years. Turn off into it, and you'll find a plaza left behind by time- decrepit, decaying, and a haven of abandoned vintage retail.

At one end, lays a former Publix, that also spent time moonlighting as Food World before Publix sent that concept to the dump where wavy pastels and 1st generation Greenwise now reside. At the other is the focus of today's post- a very vintage Sears 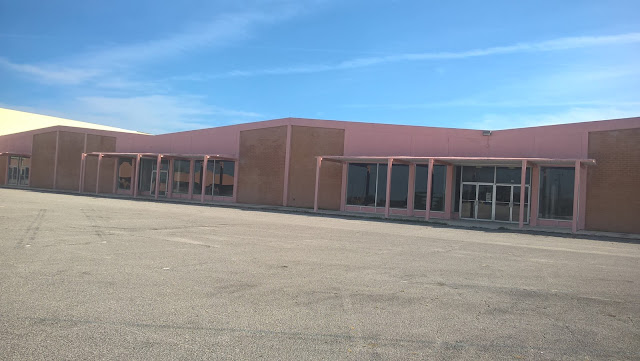 For a parking lot empty enough to be used as a driving school, you'd think I'd be able to take the time to back all the way up and get a nice establishing shot. But somehow I failed to, so this crooked one will have to do. 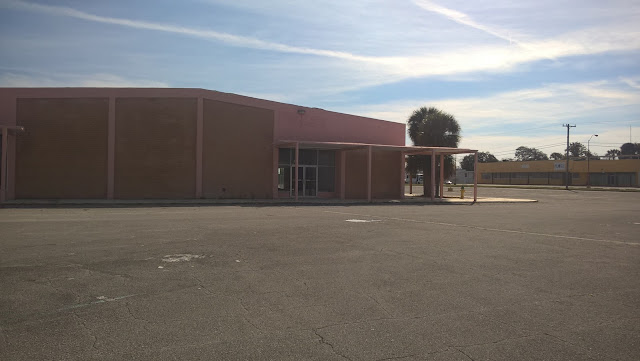 The store opened very early- I'd wager the 1960s, and lasted a decent amount of time, operating until the late 1980s when Merritt Square constructed a new wing with Sears as the new anchor. 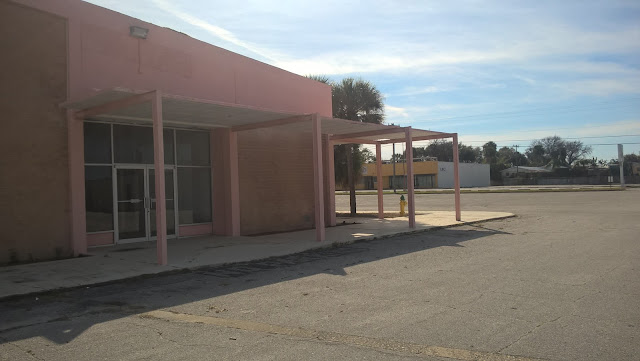 The store has some rather unique architecture, at least for structures that still exist. The roofline makes "peaks" in sections, with brick "panels", and metal awnings over the entrances. The former Searstown Mall location has what I'd call a later evolution of this style, which dropped the peaks and implements more generic modern Sears architecture while keeping the metal awnings and brick. 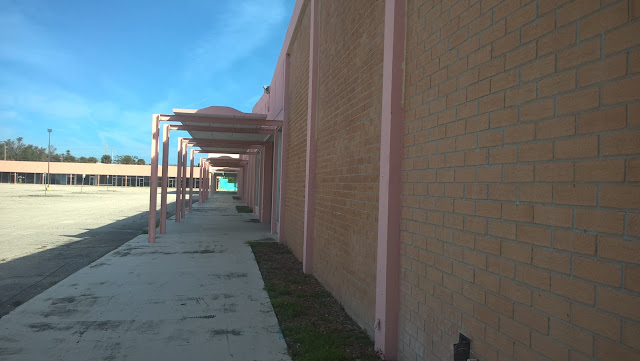 I imagine that dirt patch would have had some kind of plant life there long ago, though it seems too small even for the most basic landscaping ferns. The rest of the plaza, completely dead, can be seen in the background- the only activity is the Molly Mutt III thrift store on the end, out of frame, and some renovation activity on the other end, for an unknown business. 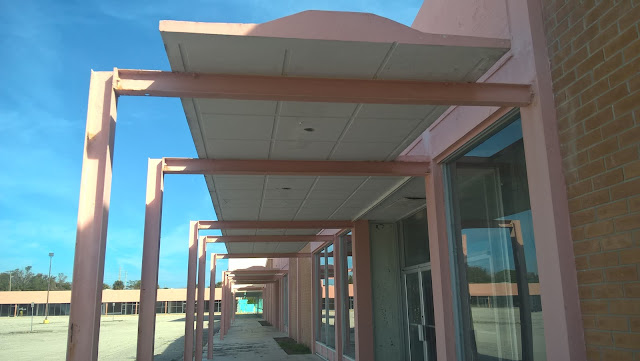 Here's a close up shot of the canopy. The bottom really looks like an interior ceiling, which is funny, because the actual interior is a hundred times worse than this. 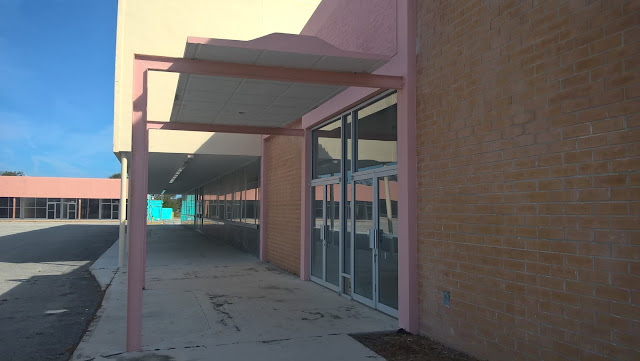 Here's the farthest entrance(?) to Sears, with a smaller canopy. The former Publix can be seen immediately next door; I'm not sure if there was ever any corresponding drug store anchor here. If there was, it was in the strip you can see further in the background. 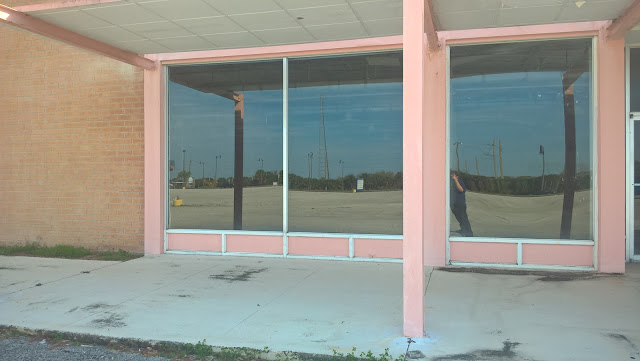 Ah, windows. Beautiful, beautiful nearly floor-to-ceiling windows. These were a common feature of department and catalog showroom stores in the 1960s, however as the decades marched on many stores decided that big bright interior lighting was the hot new thing, and bricked up these windows. You can usually find them in the wild by looking for visible "panels" in otherwise smooth walls; those "panels" were in some cases windows long ago.

This store, because it closed in the 80s, never lost most of it's beautiful, beautiful window panes. 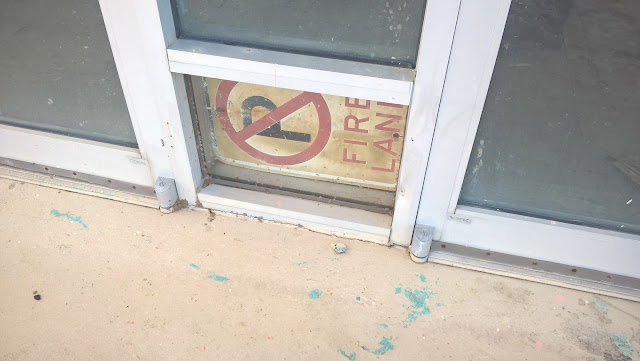 This is just something interesting I found- I guess one of the old Fire Lane signs got propped up inside after a while. I find it amusing how well it fits within that little window pane. 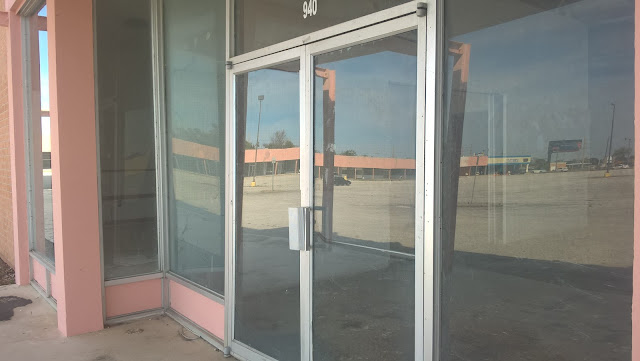 Here's a close up of one of the entrances. For a structure of it's age, this shot highlights how amazingly reflective the glass is. Another thing to note is the style here- this style of silver-trimmed windows and doors are an easy to spot hallmark of 60s construction- a similar style can be found in a few other plazas around Florida. 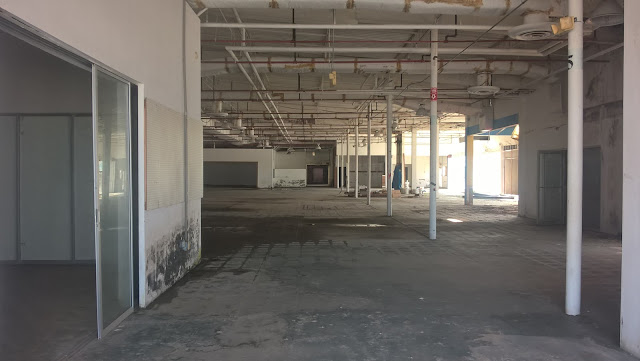 Let's begin our scan of the interior- while the well kept windows do allow us a good look inside, there aren't exactly relics abound for us to see. The interior is pretty well stripped out (albeit well lit)- I think the ceiling was possibly removed, as I can't imagine this exposed metalwork ceiling fitting a 60s style. 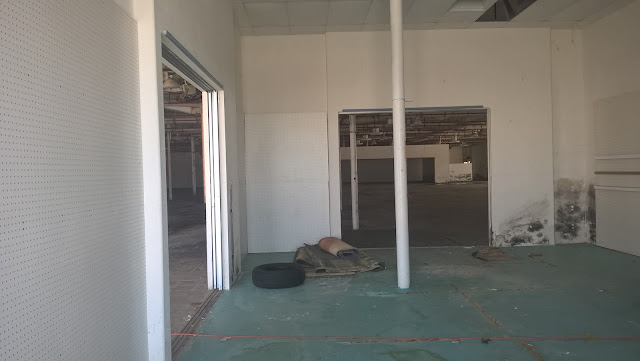 I'm unsure if this small room was a Sears remnant or not- I can't figure out what it would have been. The pegboard makes me think tool department, but it's way too tiny for that. and the Pegboard looks too new anyways. It's been here long enough to catch some black mold, at least. 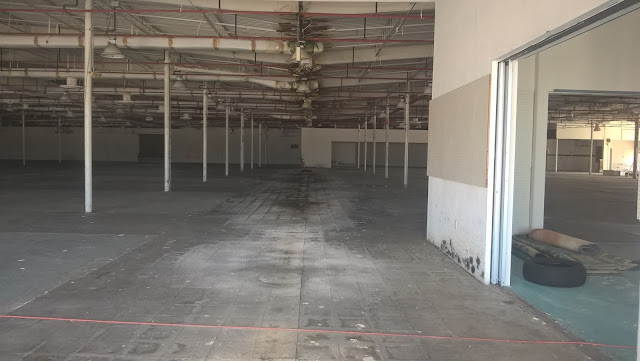 The left wall of the mysterious room, with some form of old whiteboard or similar on the wall. And more black mold. Can't forget that. 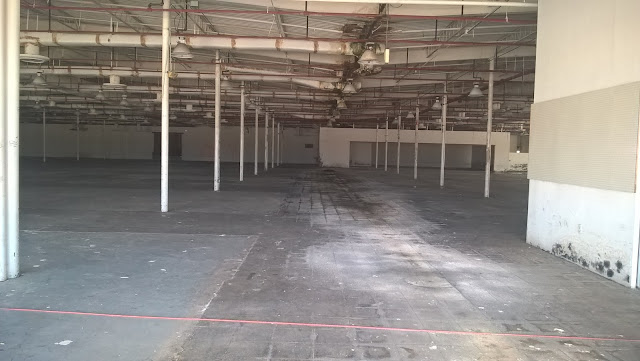 I don't know what the semi-walled off area in the back was, possibly some big display? It's also hit me that the tile flooring seen here could be denoting where walkways would be, with shelving and similar in the places with purely flat concrete. 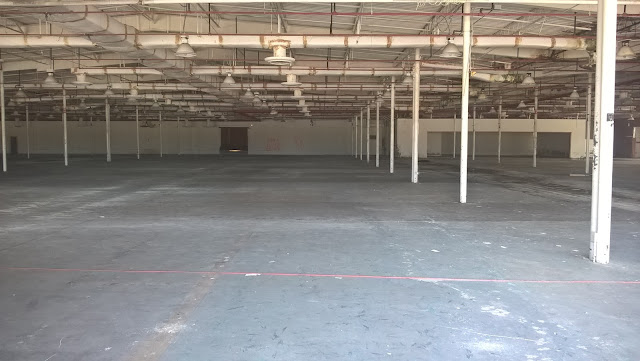 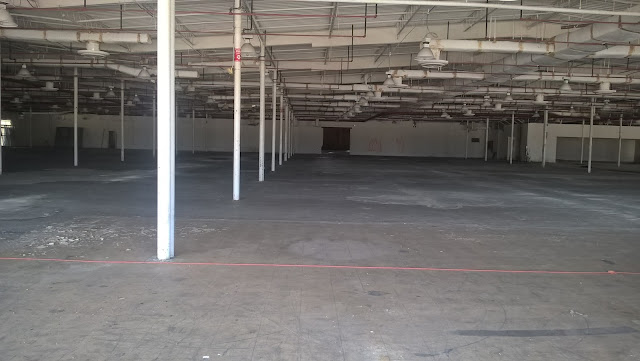 One interesting thing to note is that you can actually see the "peaks" in the roof here, if you look at the beams. 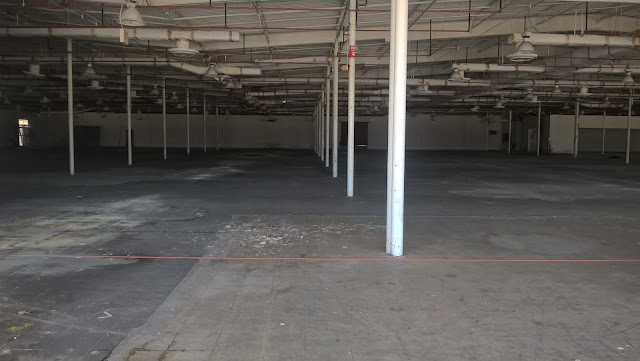 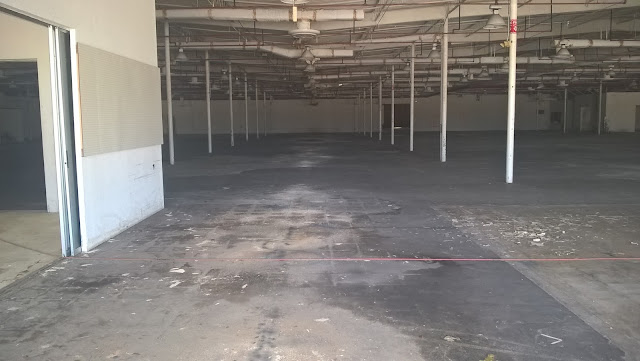 Another mystery room! And another whiteboard. 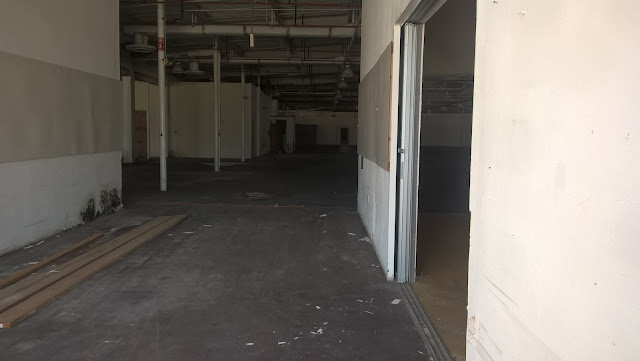 This feels like a back-area of the store, maybe the small entrance outside was an employee entrance? I can't remember if it connected directly to this, thought it looks like it.

This sadly ends our exploration of this delightfully vintage ex-Sears. (at this rate all Sears will be ex-Sears by 2020...). There's certainly more to cover in this plaza, and those photos will come soon (I swear I'll get more than one of these done every couple months)

Posted by Cape Kennedy Retail at 7:38 AM