Beginning in 1945 as an adventure to serve rural residents of North Central Florida, Bob Hitchcock opened his first supermarket in Alachua, FL. Over the past 74 years it grew to be a well respected small grocery chain in the rural areas outside of Gainesville. Hitchcock's slogan to this day is "Always Fresh. Always Friendly." Hitchcock's was a family-owned business until 2008 when the stores were sold to Haug Enterprises (the parent company of Cub Foods out of Minneapolis, MN).  Haug Enterprises appears to be a subsidiary of Supervalu Foods (the company which  used to have a large chunk of Albertsons until 2013). With that in mind, the private label products carried in Hitchcock's Markets are Supervalu brands (like Essential Everyday, Superchill sodas, etc.).

While Publix and Winn Dixie dominated Florida's grocery scene over the last 70 years in urban areas, a lot of these small towns like Alachua, Newberry, Interlachen, Hawthorne, and others seemed neglected.
This problem is exactly why Bob Hitchcock got into the business. He had a love for food and serving the public.

I have not been blogging much lately or uploading to flickr because I've been really busy recently and haven't had much time to pull out the handy cell phone and spook a person here or there in a supermarket. I don't think most people care. They understand we live in the digital age where people randomly take pictures.
I ended up getting lucky today with a church activity in nearby Fanning Springs. We had a barbecue catered and I enjoyed a refreshing dip in the 72 degree Springs (which feels frigid at first!) .

When I get a chance to get outside Publixville (I mean Gainesville), I enjoy finding new stores to photograph.
As luck would have it, Hitchcock's Markets newest and nicest store just happened to be two miles away in nearby Old Town. 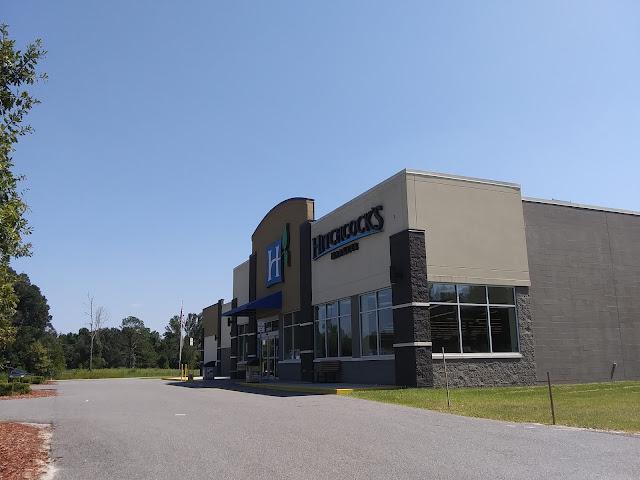 This Hitchcock's is a very nice looking store. They incorporated a lot of windows across the front of the store to let in natural light. It reminds me of a small Publix, but it's a lot more interesting and less "homogenized" looking than just about every Publix Supermarket I have the enjoyment of seeing on basically every other corner in Gainesville. In some ways, I feel like these people out in the boonies are a little lucky in that they have a supermarket that feels more homey and fitting for their area than as I just described with Publix above. 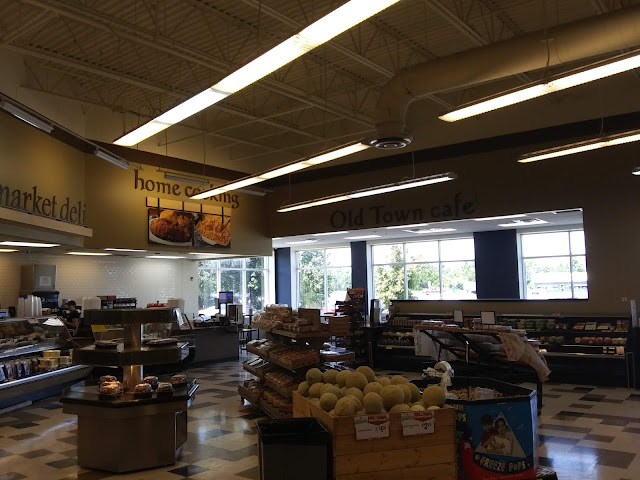 After turning immediately to the right upon entering the store you are greeted by the hot foods bar which is labeled as "Home Cooking". Those are the two words folks in the Deep South love to see in a supermarket.
This Hitchcock's store is a new replacement for an older store which existed on CR 349 just a mile away. In 2013 Haug Enterprises was able to improve the Hitchcocks's footing in Dixie County by way of a New Markets Tax Credit (NMTC). This particular region of Florida was identified as a food desert by the FDA, thus allowing Haug to receive the bank loan through the tax credit program in 2013 to build this new Dixie County store. In June 2014 this new Hitchcock's opened for business.

Dixie County is a very isolated and low populated county on the upper west coast of Florida about an hour west of Gainesville. I can attest from my drive out here today that there isn't much out this way. The closest Winn-Dixie is 15 miles away in Chiefland, and the closest Publix is in Newberry (also about 25-30 miles to the east). Hitchcocks doesn't have much competition out here. From what I could see however, the prices looked pretty decent. I didn't find them to be outrageously priced like some people said of the Alachua Hitchcock's. 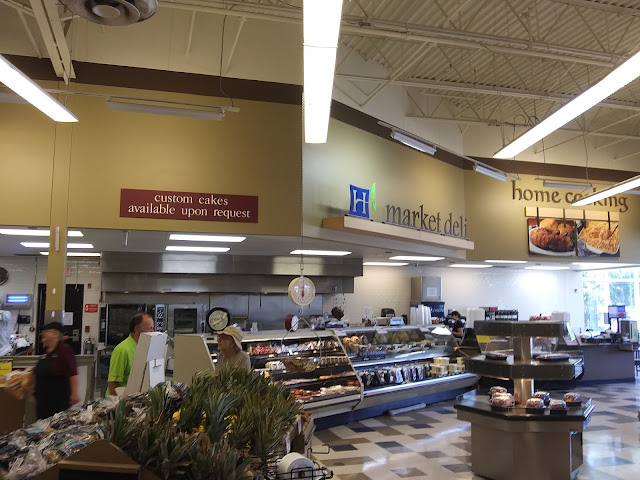 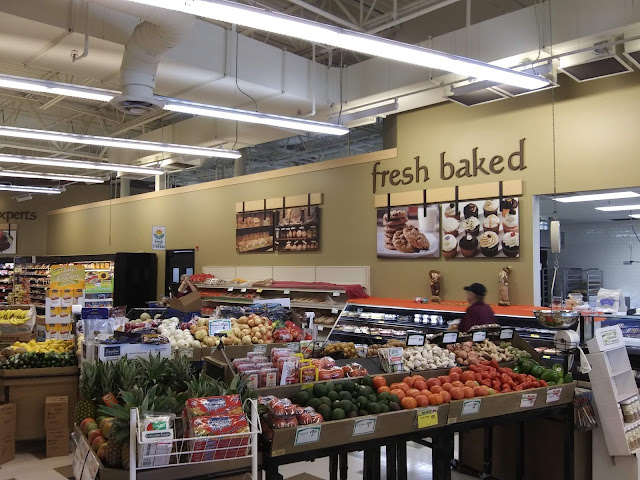 And then of course there is the bakery where you'll find that everything has been "Fresh Baked". Personally, I find these Hithcock's Markets to be pretty nice stores. I'd say they are nicer than your typical Winn-Dixie store; maybe not as fancy as a Publix, but they are more interesting to 8look at than a Publix! 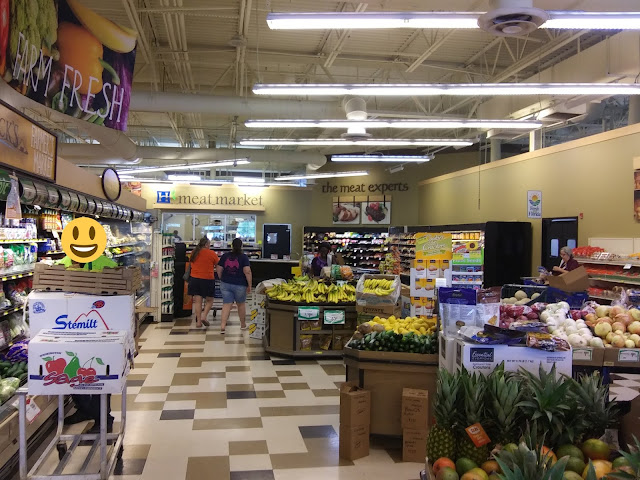 I didn't realize it until I went to put this post together, but the guy putting away Produce behind those boxes was caught off guard. He had a hilariously shocked, deer-in-the-headlights look on his face when he realized he was in my picture :)
He was nice though and wasn't bothered by my picture taking. I gave him the respect of being concealed though, as to not potentially embarrass him.

Talk about bananas! This store had plenty of them. All around, a really nice and clean layout for the Bakery, Deli, and Produce departments here. I'd also like to add that I really dig those multi colored tiles. I feel like they bring a vibrance to what would otherwise be a very boring white tiled floor. 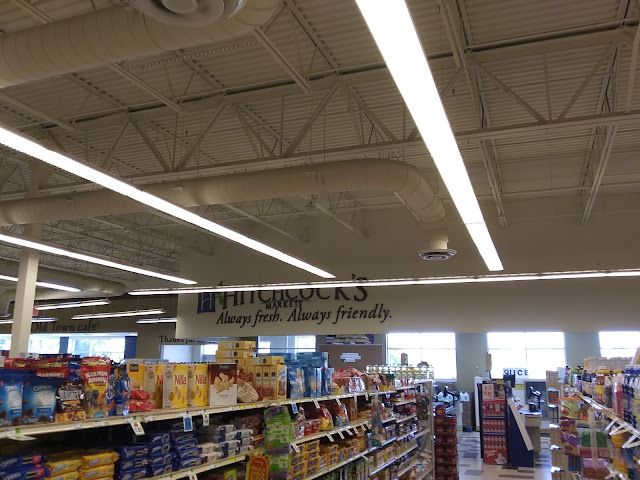 In the Snacks Aisle I took the opportunity to capture the store's slogan "Always Fresh. Always Friendly" 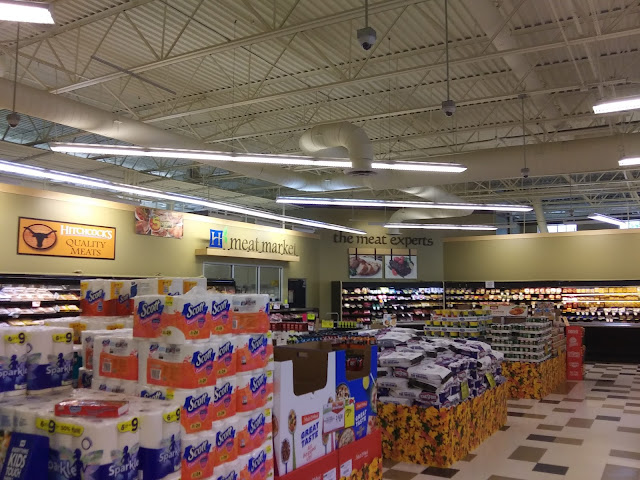 Actually after giving it some thought, the decor in here is just a tad like the Safeway "Lifestyle Brown" decor, even with the font. 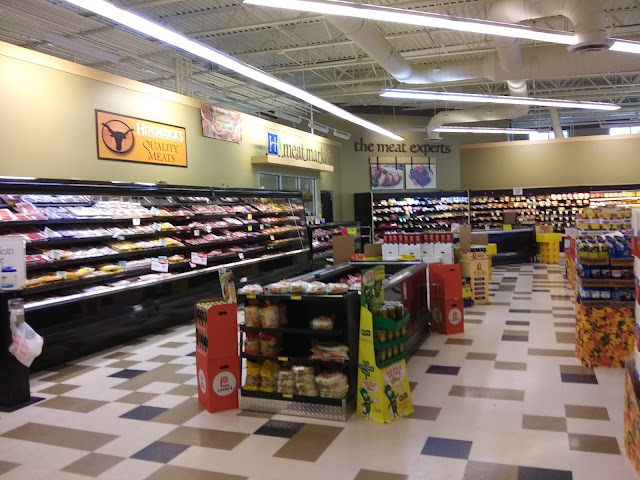 Here is a more backed out view of the back aisle looking toward to back right corner, which contains the Meats (deli meats, with the meat counter at center, with packaged meat down along the back wall). 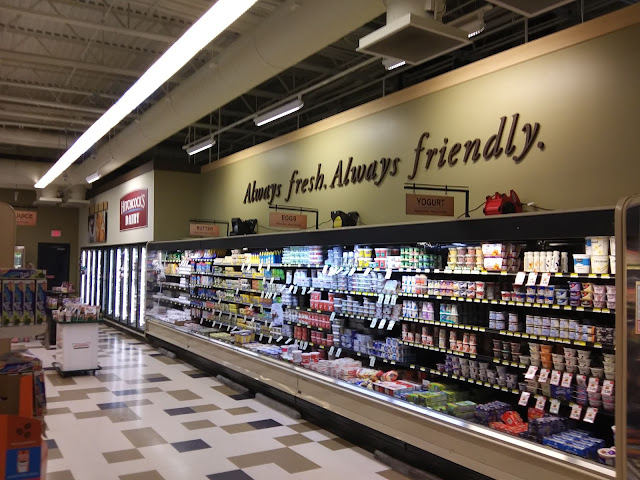 They really want you to know, whether you're here to buy produce, meats, or dairy products that everything here is provided under the circumstances of being fresh and friendly. 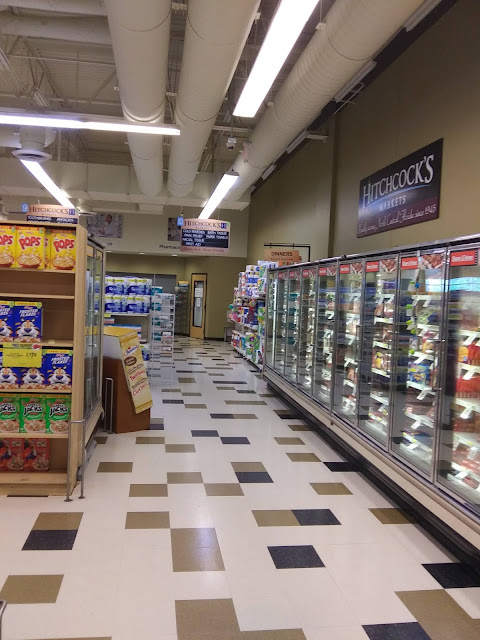 Along the left wall are the Frozen Foods coolers 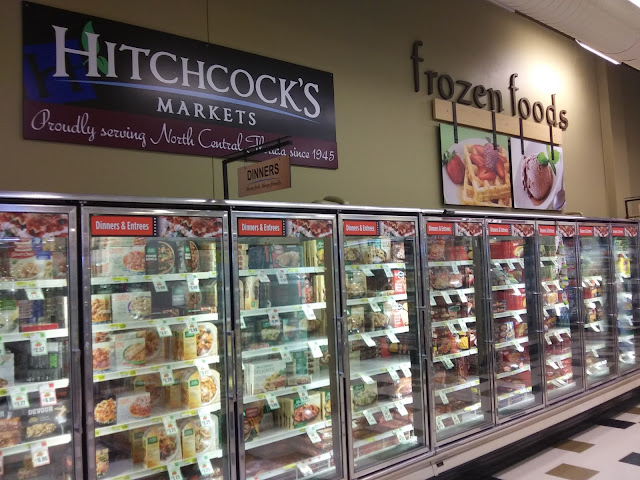 And here's a better look at those Frozen Foods with a little bit of historical Hitchcock's information on this brown sign. 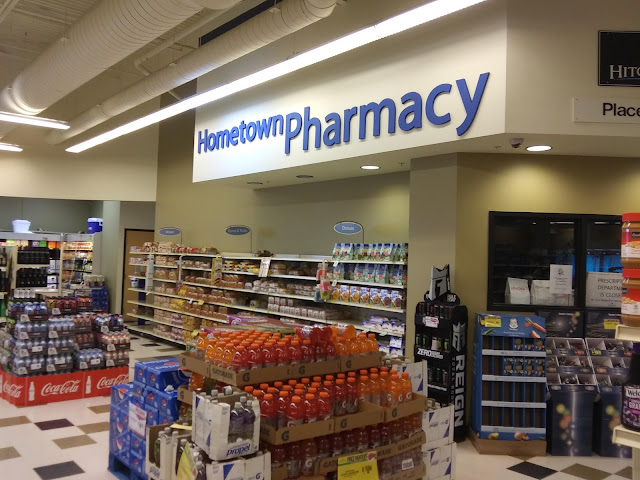 A Hometown Pharmacy! Yes, here in Dixie County where there's a lot of nothing, this is by far the nicest place to pick up your prescriptions. Strangely though this Pharmacy was already closed for the day and it was only 2:30 p.m. 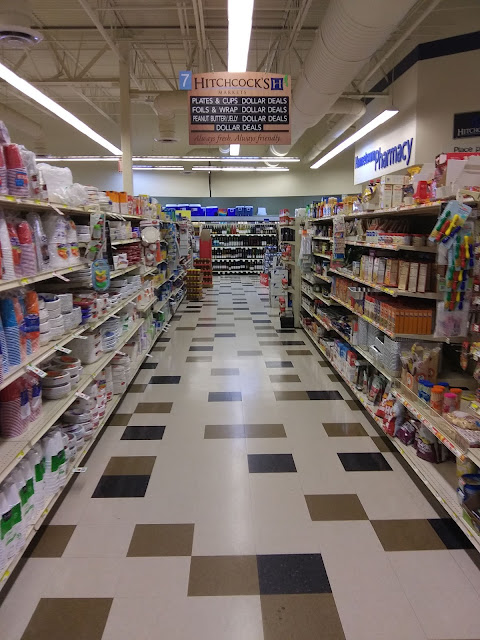 Down the aisle closest to Frozen Foods are paper plates, some cooking items, and some type of Dollar Deals section (probably a much smaller version of Winn-Dixie's new Dollar Shop). 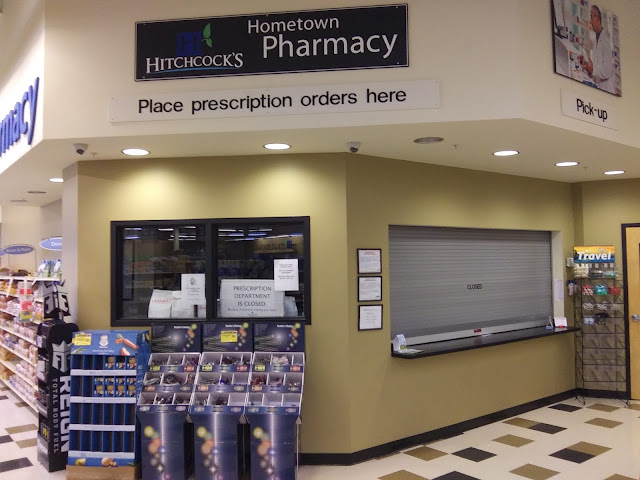 Here's a closeup of the Pharmacy counter which is totally closed up and locked for the day. The Pharmacists who work here have an easy job compared to CVS and Walgreens pharmacists. 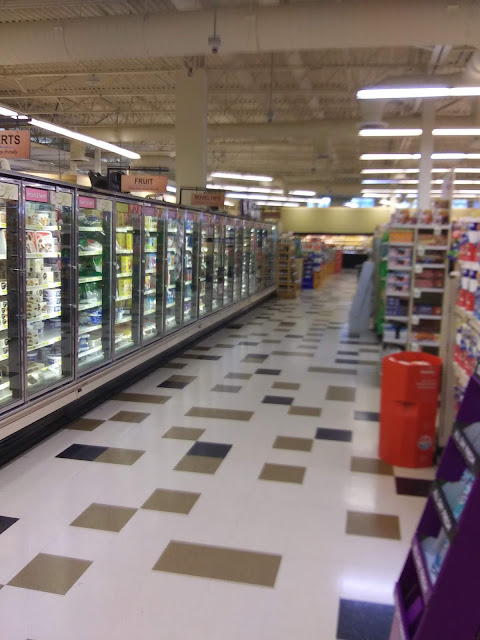 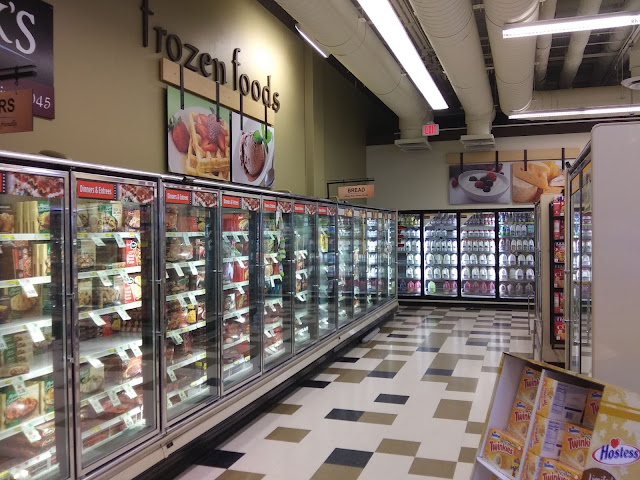 Frozen Foods aisle looking toward back left corner, which is Dairy. 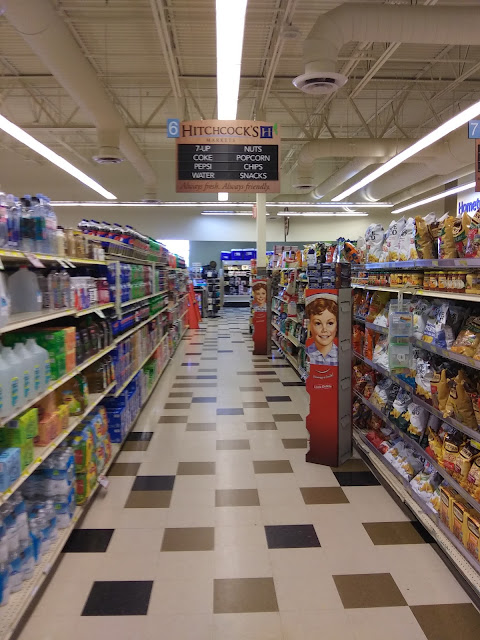 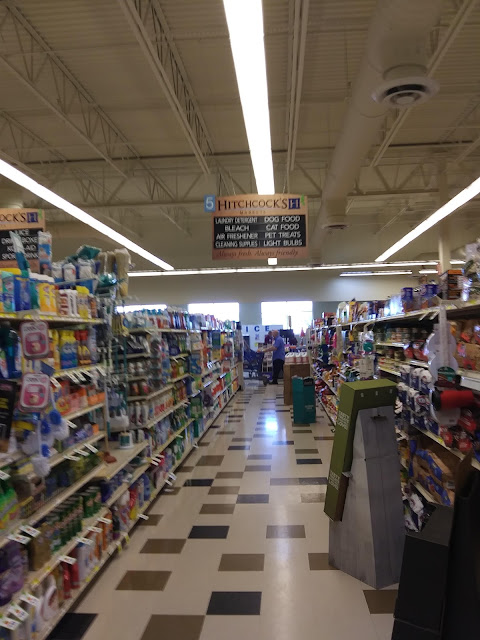 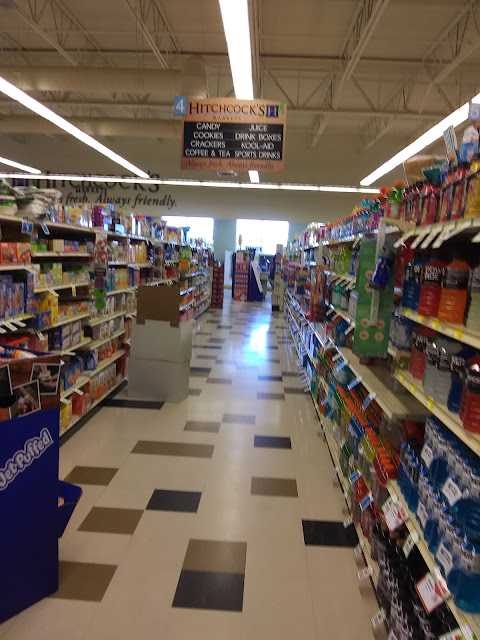 And a last look down a grocery aisle which contained beverages and snacks. 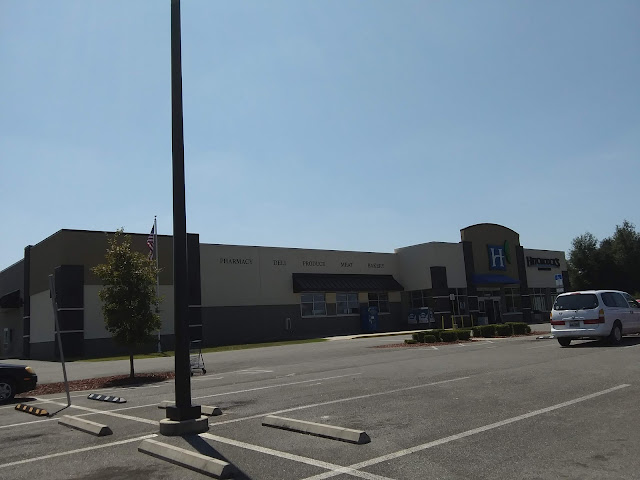 As I went back outside it was a bright sunny day and surprisingly this photo came out decent enough to capture the store looking at it from the left side of the parking lot. I really like the architecture of this store. This is the newest and definitely the nicest of the 9 Hitchcock's Markets spread out across North Central Florida.

As you saw on the inside this store has a pharmacy, but not only an in-store pharmacy but a Drive-Thru Pharmacy! But you could set at that Pharmacy window for 18 hours before a prescription could be anywhere close to being filled, as seen in the photo below. 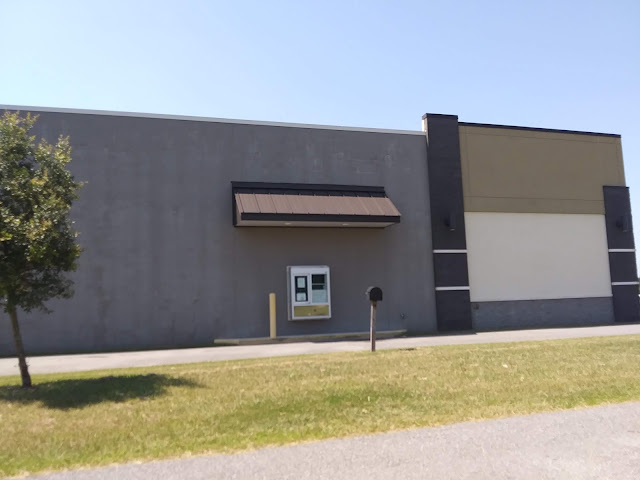 Before I wrap this up, I want you all to get a look at this grocery cart. That's the strangest looking one I've seen. Maybe if Retail Regents on flickr happens to see this post, he could identify it. I have no clue! 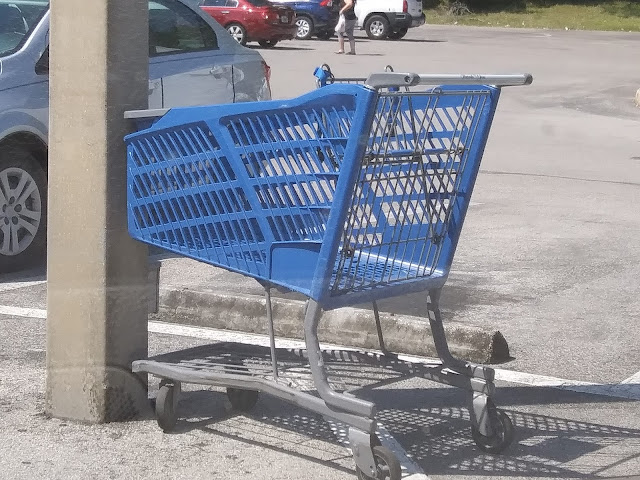 Also, if anyone who sees this post who wants to visit this store in the future, perhaps in the late summer, I highly recommend visiting Fanning Springs seen below. That water is beautiful and the park is very clean! 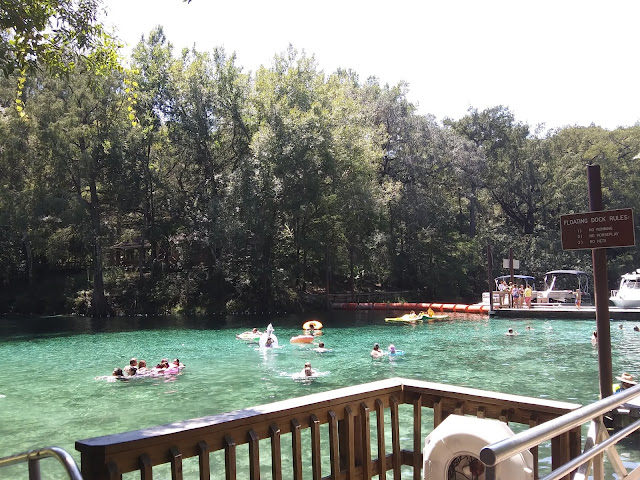 If any of you retail fans ever find yourselves traveling up West Florida's US 19 heading up toward Tallahassee or points north, don't forget to check out the Old Town Hitchcock's Market just 2 miles north of the Suwannee River in Dixie County.

Posted by YonWooRetail2 at 9:07 PM