Ah, Mr. Donut. Started hot on the heels of other large donut chains in 1956, it grew to over 500 locations in the United States before being unceremoniously sold to and integrated into it's one time competitor, Dunkin Donuts. After a rather rapid conversion period, that, like most Dunkin acquisitions resulted in what seemed like a lot more closures than conversions, the old Mr. Donut was left with a single location, hidden away in Illinois.


However, our tale doesn't end there, with a quiet, withering end. No, while Mr. Donut may have all but fled the United States, he's alive and well in the abroads. Better than he ever was, actually, as expansion efforts in Japan, beginning in 1971, have resulted in over 1,300 locations in an area not much bigger than California, more than double the number of US locations at their peak. There are also a further 1,800 outlets (think like a donut stand) in the Philippines, in addition to 200 full scale stores there. Then to round off the laundry list, there's 84 locations in Taiwan, 80 in South Korea, 20 in China, and a brand new location in Malaysia.

Down in Titusville however, Mr Donut is long gone.... but only in name. 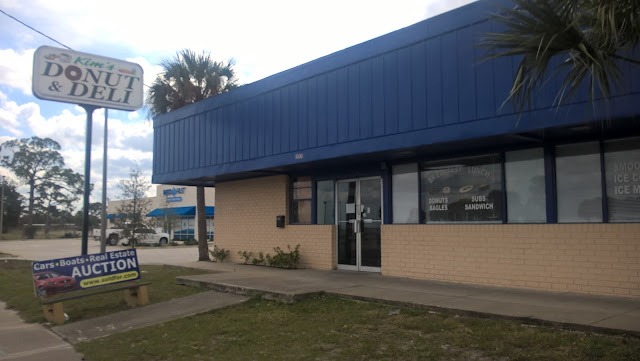 Now while this building may look pretty generic, it is indeed a Mr. Donut original. Late into the company's run, they dropped the more distinctive spiky locations for this more boxy fare. It should be noted however, that this location is actually a spiky->boxy conversion, as if you look around back you can see the old spiky roof line. I don't have a photo of this sadly, as I didn't figure it out until I was messing around with Google Maps many months later, and during my visit I was more focused on getting inside. 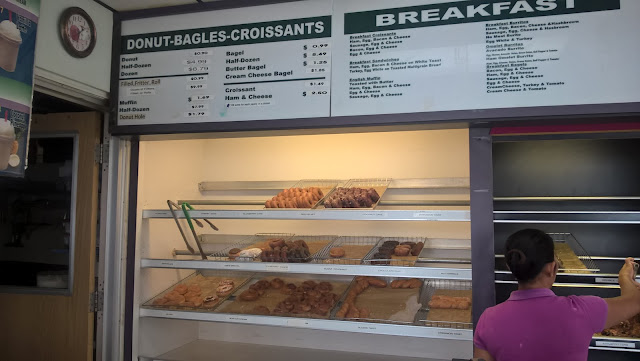 Dipping inside, it's a nice little place, with plenty of remnants too. While the menu boards have obviously been replaced (I don't think Mr. Donut corporate would have let "BAGLES" slide) I think the donut racks are renovated Mr. Donut fixtures.

And while we're staring at them, I should note they're really good donuts. Whenever I'm in Titusville stopping here has become all but mandatory, and sometimes I almost want to force trips to go through Titusville just so I can stop here.

I'm not sure if the lady in the photo is Kim herself; but it likely is, being a very small and totally independent operation I can't imagine there are a ton of employees. 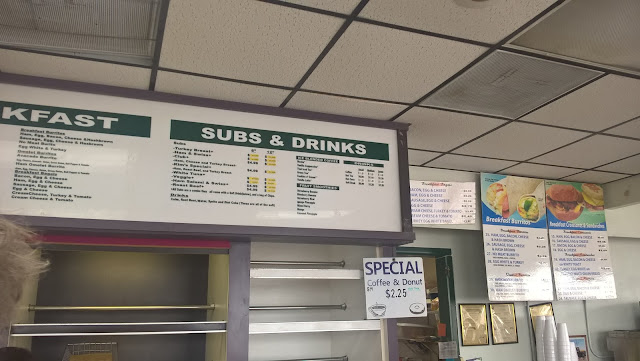 Here's the other end of the menu board- I've also heard very good things about the subs and sandwiches here, but when I was in I was in a distinctively donut mood. A bit of possibly original orange can be seen peaking out under the menu board to the left. 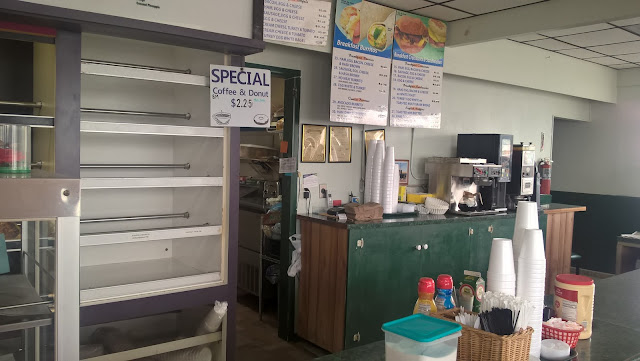 This post shows a bit of the counters, which I really thought I had better photos of. Maybe I was antsy because there was shock- other people in here (considering I'd spent most of the day with my camera in places thoroughly dead, that was a surprise) or maybe I was just distracted by waiting for my donut. The bizarre green-pattern vinyl was added by Kim's or the tenant before, if they existed, not Mr. Donut. They'd have a far more orange decor.
This (sadly a bit dim) photo borrowed from Google's photos of the establishment show the biggest relic of them all: the tables! Comparing them with the fixtures present in the US' last official Mr Donut in Godfrey, IL they are almost a perfect match- this set just a fair bit more weathered.

Hopefully you enjoyed this post as much as I enjoyed my donut (at the time, anyways)- Brevard County is home to multiple former Mr Donuts in rather good condition, and this isn't even the only one that's still a donut shop! Or should I say Shoppe....