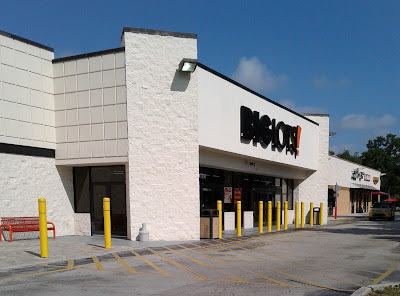 To bridge the gap between our two remodels, we're going to use this post to take a quick look around the building that housed New Smyrna Beach's original Walmart store. While this building was been chopped up into 5-6 different storefronts in the post-Walmart era, the building is still easily recognizable as a Walmart to this day. That distinctive entrance vestibule isn't going to fool anyone! 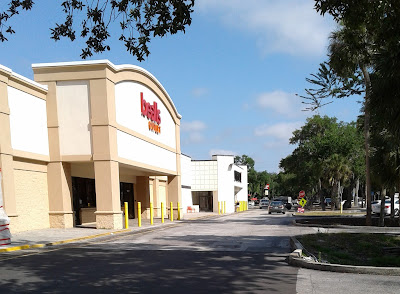 Originally opening with the rest of the New Smyrna Beach Regional Shopping Center in 1987, Walmart lasted in this tiny old building until November 15, 2011. On November 16, 2011, Walmart officially opened their new Supercenter at the northwestern corner of Route 44 and I-95 about three miles to the west of here. Locals weren't happy about the move when it was first announced, as the new Supercenter was going to be located quite a distance from the center of town, unlike the original store. Other than being right next to I-95, there still isn't much out by the current Supercenter in terms of well, anything. However, there are plans in the works for more retail and residential neighborhoods closer to the Interstate, so I'm guessing Walmart's move out that way was done looking to the future rather than the present.

Shortly after Walmart made their move to the edge of town, the building's landlord decided to subdivide the space. In doing so, the landlord was able to get Bealls Outlet to relocate from the former Walgreens space by the plaza's Publix into the old Walmart building, as well as attracting Big Lots as a new addition to town. The remainder of the Walmart building was divided into smaller spaces, including Firehouse Subs, T-Mobile, a tobacco shop, and a small gym. There is still a chunk of space between Big Lots and the small stores that remains vacant to this day. Also to note, while Publix owns the rest of the NSB Regional Shopping center, they do not own the old Walmart building. The Walmart building has always been owned independently from the rest of the plaza. 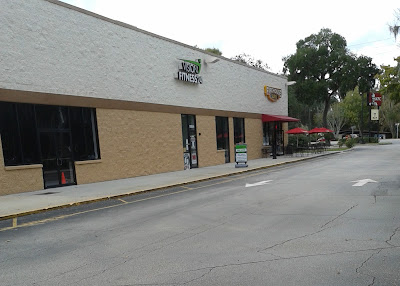 On the far right side of the building are the smaller storefronts. Pictured here are the gym and Firehouse Subs, with the two spaces between them later going to the tobacco store and T-Mobile. The doors on the far left side of the image go into the remaining vacant portion of this building. The Big Lots portion of the building will be the feature of this post. Out of all the stores in this building, I figured Big Lots would be the most likely to find any traces of Walmart in. Outside of the entryway, which is almost entirely original to Walmart, not much else remains from this building's past inside unfortunately. It's not the greatest photo in the world, but here's a glimpse at what the entryway portion of this building looked like as Walmart. 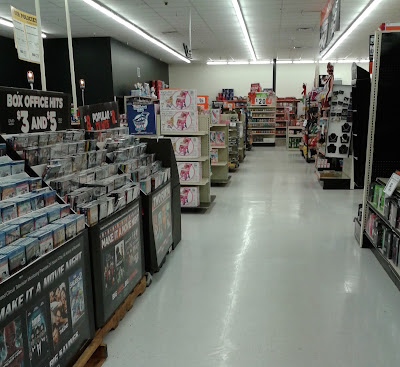 Interestingly enough, the New Smyrna Beach Big Lots opened on November 16, 2012, exactly one year after Walmart opened their new supercenter. Bealls Outlet would follow on November 30, 2012, with the smaller stores slowly trickling in after that. Stepping inside, here's a look across Big Lot's front end. The wall you see in the distance is the store's left side wall, behind which is Bealls Outlet. 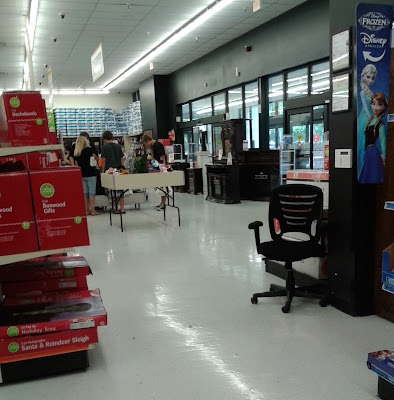 Here's a look toward the entryway from the front left side of the building. I'm standing in the area where Walmart's cash registers would have originally been located. 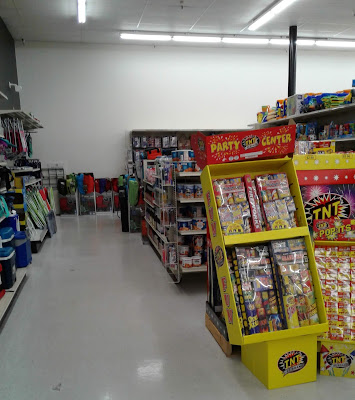 When Big Lots moved in, the ceiling, lighting, floors, and just about everything else were redone, leaving very little from Walmart to pick out anymore. 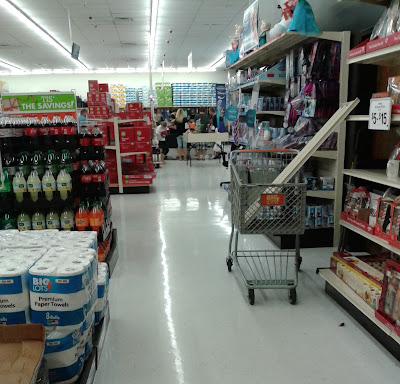 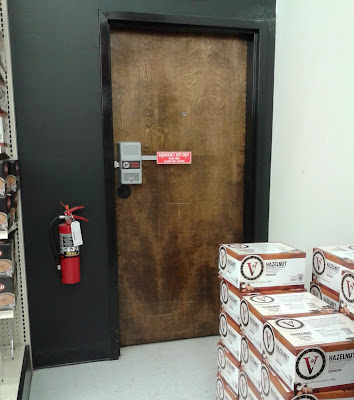 In the front left corner of the store I found this emergency exit door, which looked rather old to me. I'd say it's a safe guess to assume this fire door was original to Walmart, even if it does lack the classic Walmart fire exit decal. 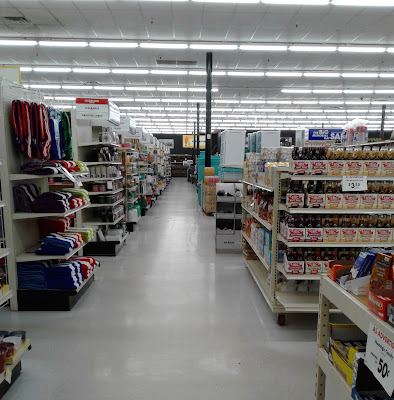 Here's the main aisle that runs down the left side of this Big Lots store. The housewares were located in the aisles to my left, with food in the center of the store to my right. 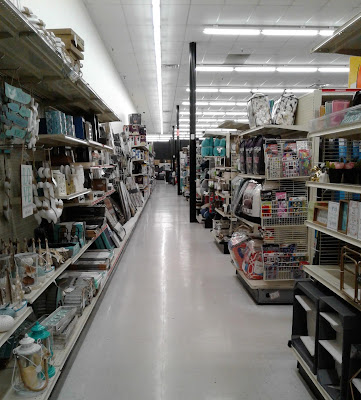 Looking down this building's left side wall. 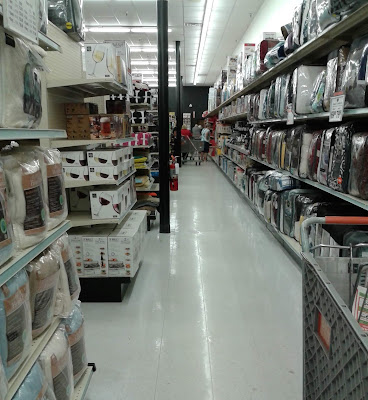 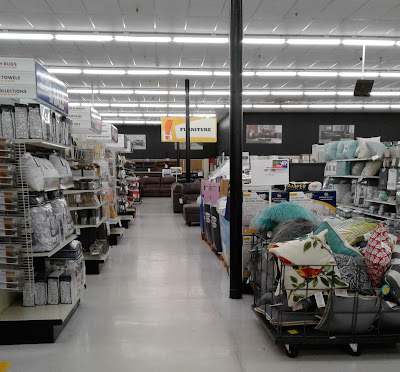 In the distance I see the furniture department... 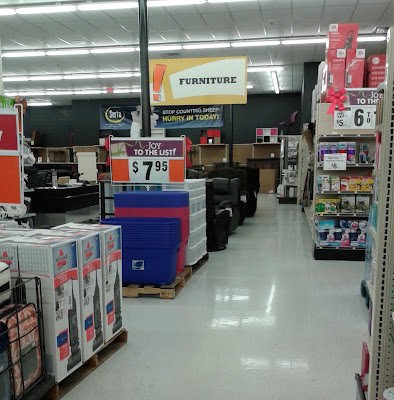 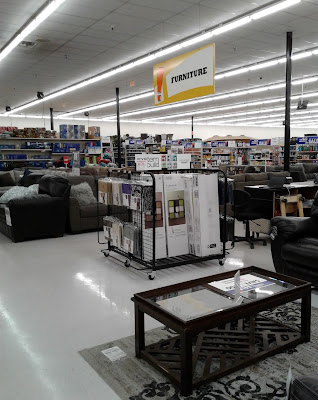 Anyway, back to the furniture department. This store had a rather large furniture selection, located in the back left corner of the store. Due to the way the old Walmart was carved up, Big Lots' space is actually L-shaped. Since Bealls Outlet's rear wall doesn't go all the way to the back of the building, Big Lots' furniture department extends further to the left than the rest of the store. In the next few photos you should be able to see what I'm trying to explain. 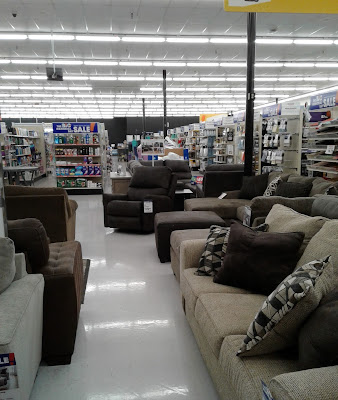 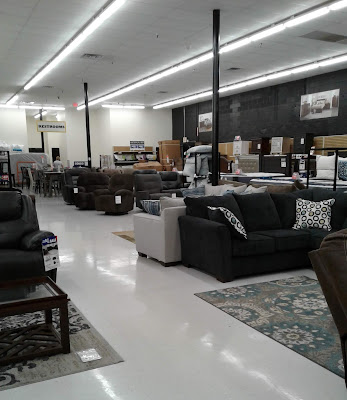 Turning around, here's our first peek into the extra space Big Lots takes up behind Bealls Outlet. This extra alcove gave Big Lots plenty of space for their growing furniture selection. Interestingly, Big Lots is actually the 8th largest furniture retailer in the United States in terms of sales, selling more furniture than some big names in the industry like Raymour & Flanagan, American Signature, and La-Z-Boy. With Big Lots' furniture sales growing quite rapidly (growing to $1.4 billion in 2017 in just furniture), it's no wonder the furniture department is becoming the centerpiece of their stores. In the Stores of the Future, the furniture department gets the most dedicated floor space of any other department, and placement in the center of the store. In addition to that, Big Lots also announced recently they have purchased the Broyhill furniture brand and all trademarks associated with Broyhill. Sometime in 2020 Broyhill furniture will launch as Big Lots' new exclusive furniture brand. 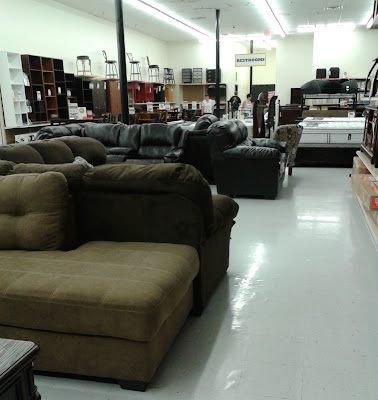 In the very back of the furniture alcove are the restrooms, located down that small hallway in the distance. 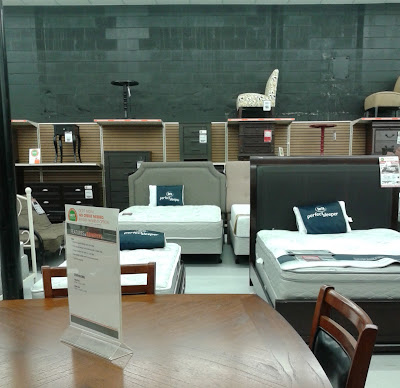 The back wall of the furniture department is the actual back wall of the store. On the wall are some scars in the block where walls were removed and holes were patched up during the subdivision of this space in 2012. 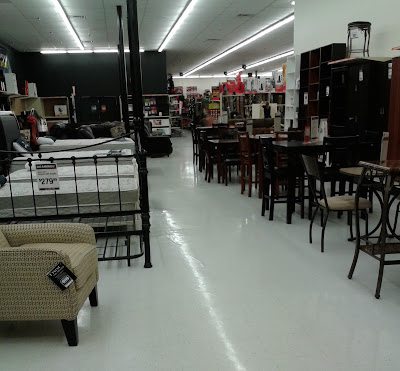 Here's a look from the furniture alcove back toward the main sales floor. This photo probably does the best job at showing how the layout gets a bit odd in this part of the building. 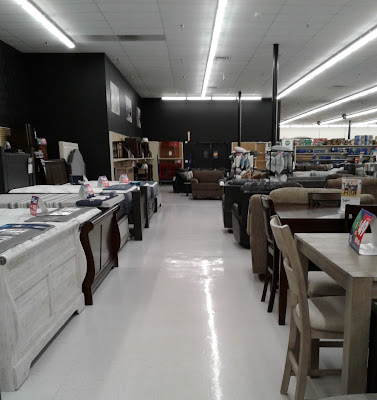 Straight ahead of us is Big Lots' backroom space, and beyond that the seasonal department. 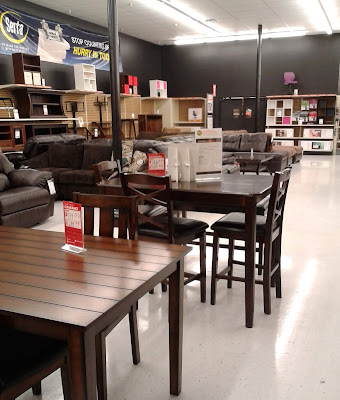 Here's a parting shot of the furniture department before we move on to seasonal. 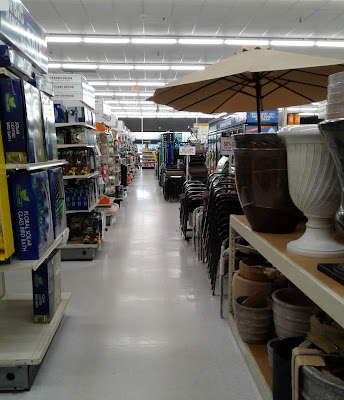 The back right corner of the store is home to the seasonal merchandise, which was patio furniture and outdoor stuff at the time of my visit. 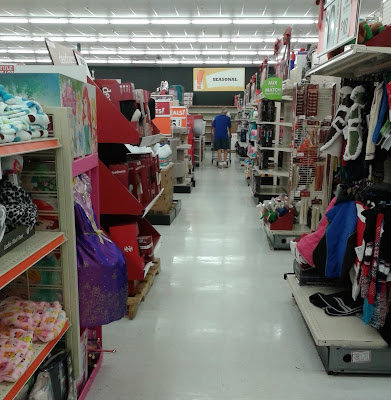 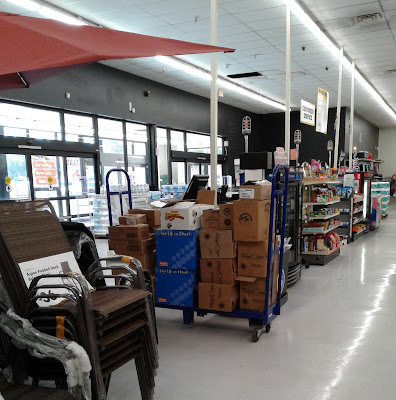 Here are a few final looks at the front end before we head back outside... 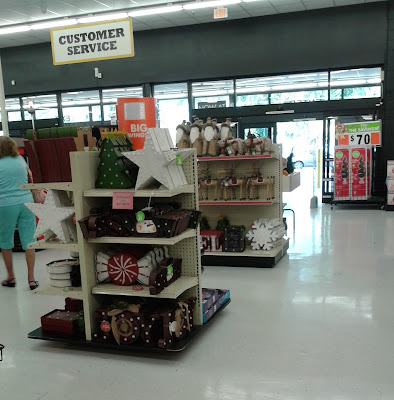 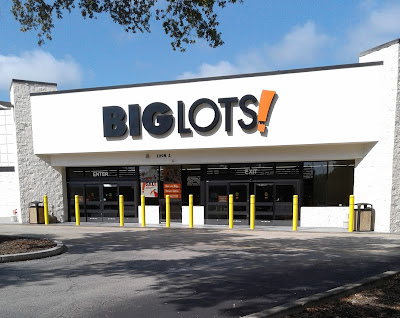 While the inside wasn't much to write home about, the exterior of this store couldn't get anymore Walmart. Even those "Enter" and "Exit" decals above the doors date back to Walmart, as those were present in that photo I linked to of this store back in the Walmart days. 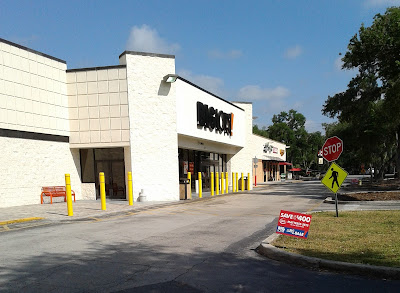 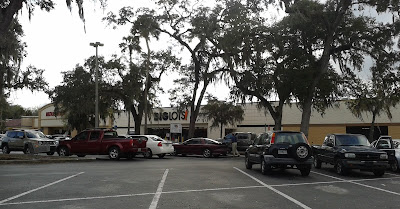 So there you have it, the New Smyrna Beach Big Lots in the town's old Walmart. With this store tour out of the way, we've also completed out rather thorough look at the New Smyrna Beach Regional Shopping Center. Next time we'll hop across the street for a taste of Winn-Dixie, where we'll get a nice glimpse at what happens when you blend 1996 with 2019!

AFB
Posted by Albertsons Florida Blog at 9:00 AM