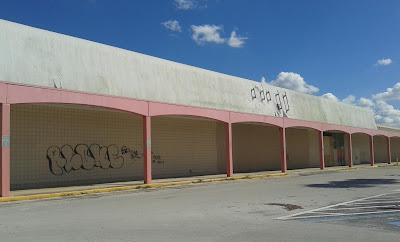 Kmart opened this store in 1971 using their customary arched front design of the time. After 40 years, this store's closure was announced in August 2011, when Kmart announced they would not be renewing the lease on this building (which was probably the store's original 40 year lease coming to a close). When these pictures were taken, the store had been sitting abandoned for 4 years, with lots of weeds and graffiti to add to the abandoned effect (and as Retail Retell said, "The "alone" graffiti is a nice touch for an abandoned Kmart :P"). During my visit to this building in late 2015, the interior of the building was being gutted and asbestos remediation was being completed. At the time I discovered plans in place to turn the old Kmart building into smaller storefronts, renaming the old Kmart building "Azalea Plaza". However, it seems like those plans have either stalled or fallen apart. As of late 2018, this Kmart still sits abandoned.

Time for more Kmart everyone, but the creepy abandoned kind this time. The few years in which this building has been sitting empty has not helped it any, and it looks really bad from the main road with all the graffiti, weeds, and boarded up windows. At the time of my visit, it appeared this building was on its way to finding new life as a new strip of smaller stores. I didn't realize this at first, but I visited this building in the middle of interior demolition work being done for the ill-fated plans to rehab this building. As I walked around the abandoned storefront, I thought I was hearing construction machinery somewhere, which is what tipped me off to something going on here, but more on that later. 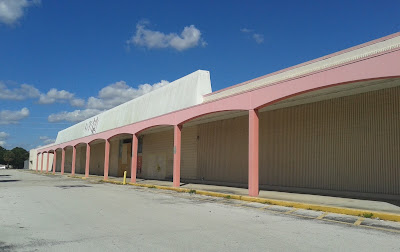 This store was a fairly typical early 70's built Kmart store with the arched front. The building feels much bigger when you see it abandoned like this, although at 110,000 square feet, that's a pretty big store by Kmart standards! 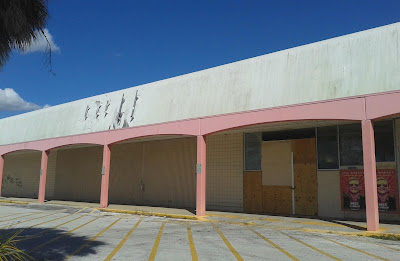 A closeup of the front of the building near the boarded up main entrance. The old bracket from the "BIG K" sign is still in place. If you're interested, this website has some pictures of this store from back when it was still open, and looking much more inviting. 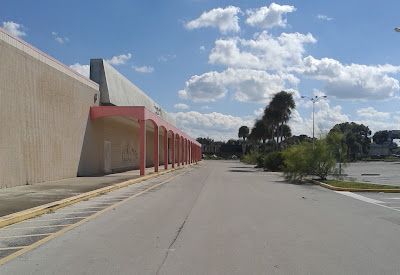 The road to abandonment. Looking down the front of the building from the left side. There was just something about this place that made it feel really creepy. 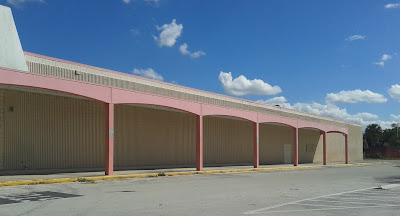 The portion of the building to the right side of the main entrance. 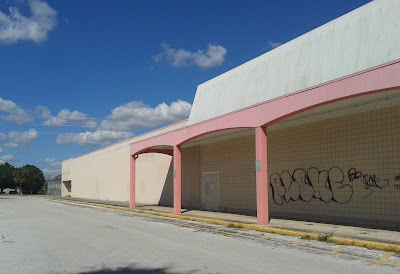 Looking at the portion of the building to the left of the main entrance. The old Garden Center is off in the distance. 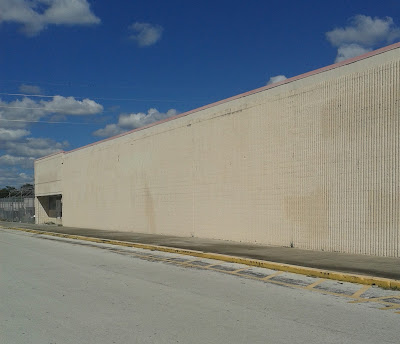 The far left portion of the building, moving closer toward the Garden Center. It looks like there may have been some more graffiti over here too, which had since been painted over. 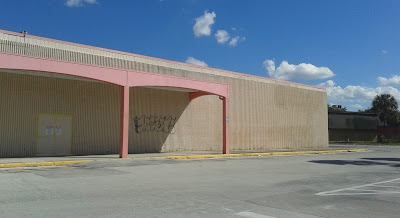 The far right side of the building. 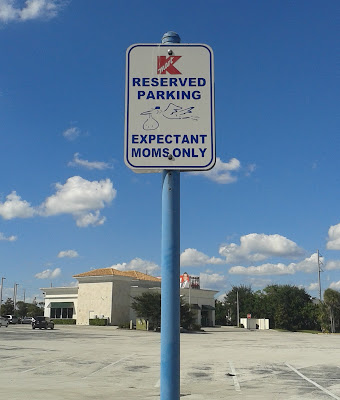 A Kmart relic I found in the parking lot, which looks to date back to the mid 90's if I had to take a guess. 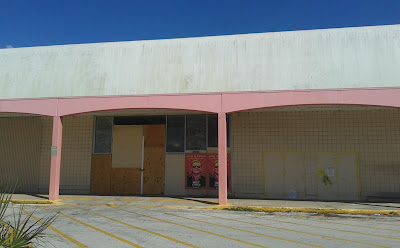 Looking at the main entrance from the parking lot. Not the most warm and friendly looking front entrance anymore. 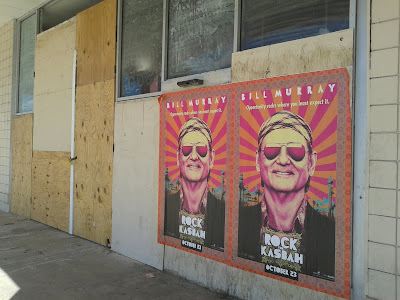 Rock the Kmart! For some reason, someone placed these two posters of Bill Murray on the front of the building, advertising his movie "Rock the Kasbah". The movie was released on October 23, 2015, making these posters a recent addition to the front of the building at the time of my visit. I never saw the movie, but according to Wikipedia, this movie had the fifth worst opening weekend for a widely distributed movie released in the US, ever. The critics didn't seem too fond of it either, but here's a link to the trailer if you're interested. Advertising a movie on the front of the local abandoned Kmart probably didn't help to generate too many visits to the theater either. 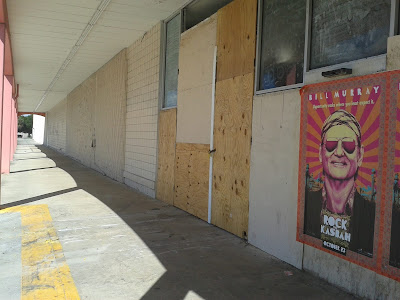 Looking down the front of the store toward the left side of the building. The areas where you see square shaped bricks were originally the location of large picture windows, bricked in during the 80's. 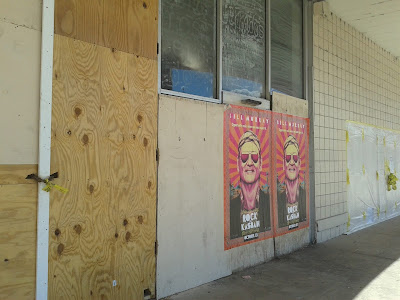 Another look at the front entrance. From the last few photos, did you notice anything not quite right about the old front entrance? (And it has nothing to do with Bill Murray). More on that in just a moment... 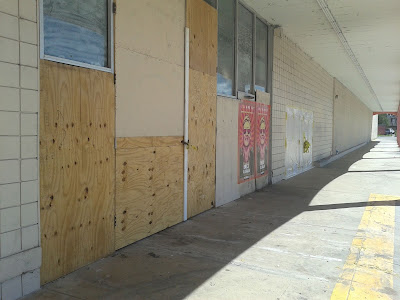 When I first arrived here, I though this place was completely abandoned. There was no one in the parking lot, and no signs of life anywhere. As I got closer to the old entryway for these close up shots, that was when I began to here thunking and crashing sounds coming from inside the building. It scared me at first until I realized what was happening. It turned out there was a construction crew inside the building gutting the place and removing asbestos, which then led me to finding the (now either stalled or canceled) plans for Azalea Plaza later when I got home. On my way out, I saw the construction crew was set up behind the building, which is also where the construction crew was parked. The not-quite-right thing I mentioned before (if you haven't noticed yet), is that part of the old front entryway was ripped out in order to let large equipment to be taken into the building, but other than that, construction access is through the back. 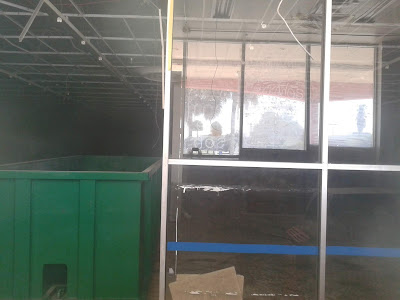 I was able to reach up high enough above the boards to get this one picture of the current state of the interior. A chunk of the interior portion of the vestibule was also removed in order to get that dumpster in there, and possibly other construction equipment. Other than the old blue stripe on the glass, every other trace of Kmart had been stripped away. Although looking closer at this photo, I believe I spy a giant air diffuser in the background too. 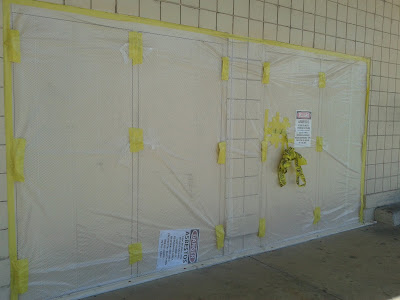 A closeup of some emergency doors off to the right side of the main entryway. Every interior access to the building was either boarded up or sealed off like this to keep any asbestos particles from escaping the building. 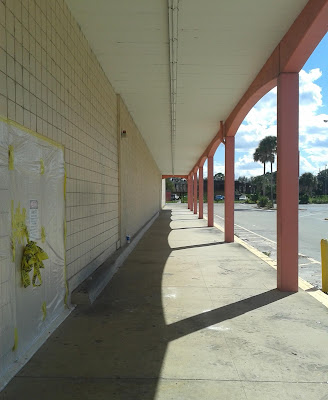 Looking down the old front walkway, toward the right side of the building. I happen to like this particular perspective myself! 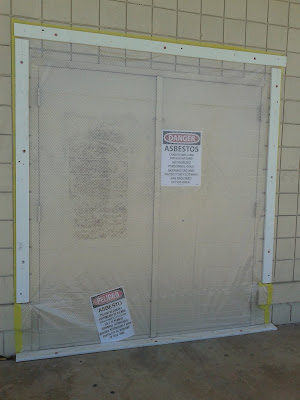 I feel like there's some sort of creepy, sci-fi like quality to these hermetically sealed doors with those danger signs on them. 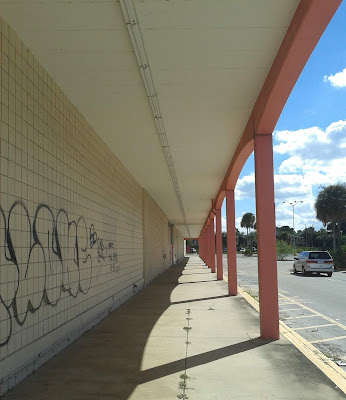 Another down the walkway view toward the right end of the store, this time taken from further back. However, unlike the graffiti says, I was not alone anymore. In addition to the construction going on inside the building, that minivan decided to use the old Kmart's parking lot as a shortcut to get to the Waffle House out front. 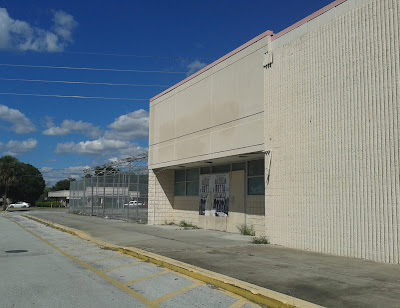 Over on the far left side of the building is the old Garden Center. This Garden Center isn't original to the store, as the design of it looks more like something from the 90's. 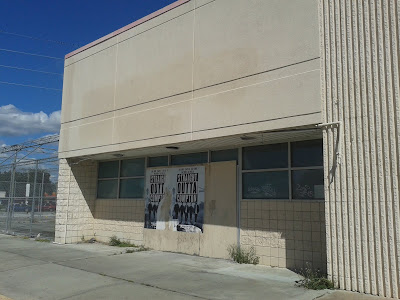 Straight Outta Kmart. Rock the Kasbah wasn't the only movie to be advertised on the front of this old Kmart. Another movie, called Straight Outta Compton, was advertised on the boarded up front doors of the garden center. This movie was released on August 14, 2015, making this poster a fairly recent addition as well when I took these photos. It was probably placed here by the same person who stuck those Rock the Kasbah posters over the boarded up front door. According to Wikipedia, Straight Outta Compton was the #1 movie the weekend it was released (unlike Rock the Kasbah). Maybe advertising movies on the front of abandoned Kmarts does help in some cases... 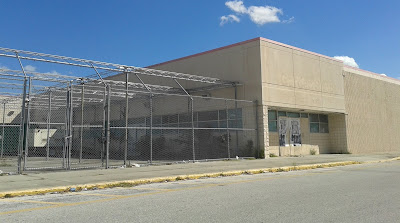 A view of the Garden Center from the other side, looking down the left side of the building. In this picture, you can clearly see the labelscar from the "Garden Shop" sign over the old Garden Center entrance. 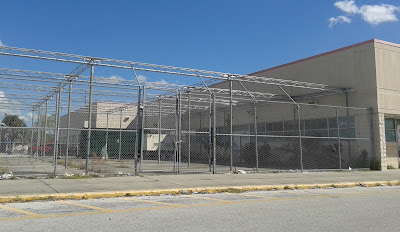 Looking at the outdoor portion of the old Garden Center. Inside the fence was another dumpster and what looks like a generator to power the construction equipment inside the building. Behind the dumpster you can see the old Auto Center. 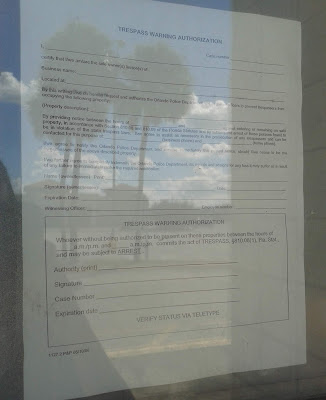 If you want to give some legality to your trespassing notice, it would probably be helpful to fill in the blanks on the paper. Otherwise, I don’t think this would pass in court. 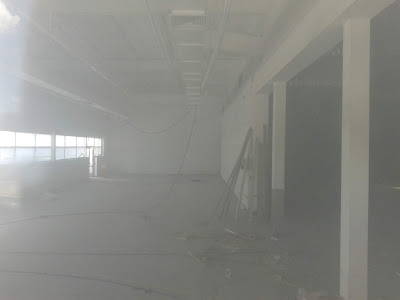 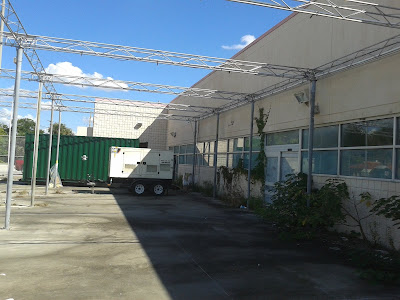 A look through the fence into the exterior portion of the garden center. Nature had begun to take back this garden center for itself up to this point, although this portion of the building will more than likely be removed once the renovations are complete. 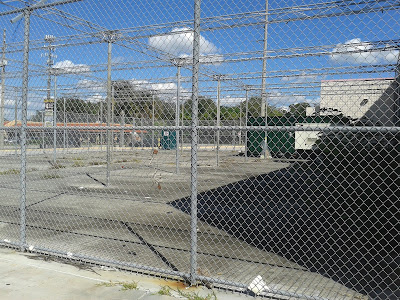 Another look into the exterior portion of the garden center, this time with the fence in the foreground. 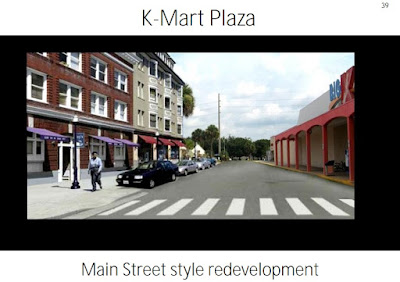 Main Street just isn't complete without Kmart. To wrap up this blog post from the S. Semoran Kmart, here’s a screenshot of a rather strange redevelopment plan the city of Orlando came up with in 2011 (published before the Kmart closed as part of a plan not related to this store’s closure). This came from a document that the city published to outline some ways to make the S. Semoran corridor look a little nicer. The plan for the Kmart was to take over their large parking lot and build apartments and Main Street style storefronts in it, with the Kmart remaining open in the same spot and not being touched. The rendering they included with the plan was the picture you see above, and I thought it was funny how there were all of those apartment buildings built practically on top of the old Kmart building. However, if this plan had gone through, where would all of the Kmart customers park? Those few parallel spaces sure wouldn’t be enough! (I know some Kmarts can be pretty dead at times, but not even ten spaces is just ridiculous!) In addition to myself, most of you thought this redevelopment plan was a bit ridiculous, with Random Retail commenting "That would of been really odd for any store if that actually would of played out," and Sunshine Retail saying, "Ha. Imagine how ridiculous that would look in real life XD". l_dawg2000 took this redevelopment concept one step further, using it as inspiration for his own redevelopment project at the Jonesboro, AR Kmart store!

So that's our look at the former South Semoran Kmart! Like I said earlier, this building is still abandoned as 2018 draws to a close. The only major change since I took these photos was the awning over the main entrance being removed (as well as the removal of the Bill Murray posters), which happened not too long after I took these photos. If you still want to see this place in all of its abandoned glory, you still can!