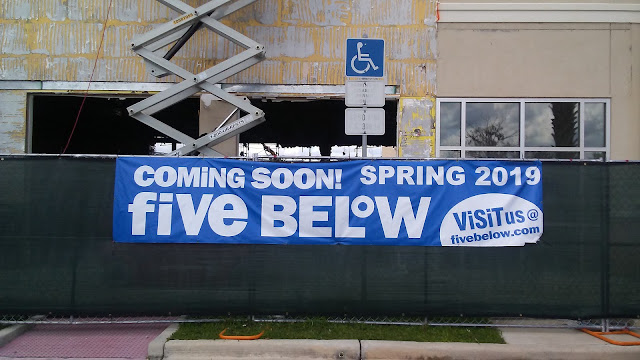 This was a surprise to see when I got here- I can't remember if these were from when I was photographing the also under-construction (but much farther along) HomeGoods in the ex-hhGregg, but it's clear Hammock Landing was in a period of upheaval at this time!

Also, I guess the opening date shown here kind of exposes how long I've been sitting on these photos. Whoops. 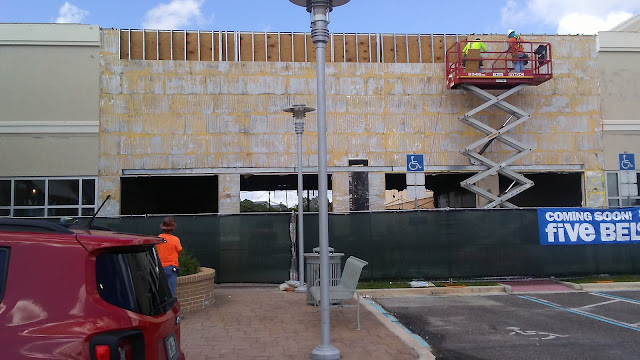 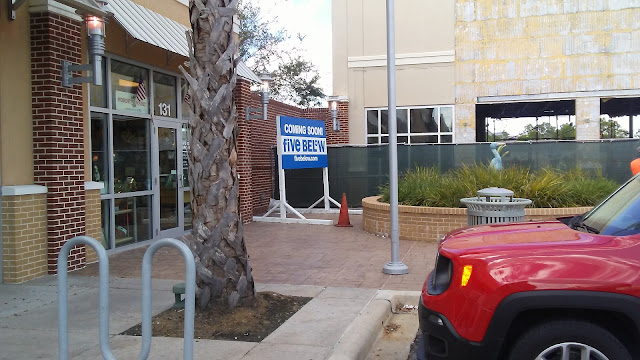 Five Below is situated on the "corner" of Hammock Landing, behind this little square of landscaping and benches. (And no fountain! It's circle shaped! WHY DID YOU MAKE IT PLANTS AND NOT A FOUNTAIN?). We can also see a much smaller Coming Soon sign here. 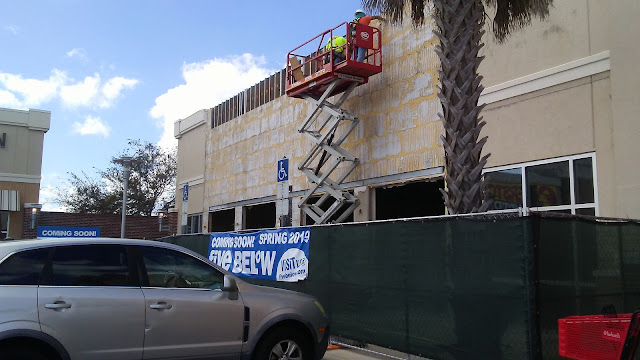 This is probably my favorite shot from this little set; it's a good angle and I have most of the storefront. It's interesting to see here what's been kept from the original storefronts despite the extreme renovation on the rest.

Now, let's fast forward to September 2019; a little while after this store had opened. 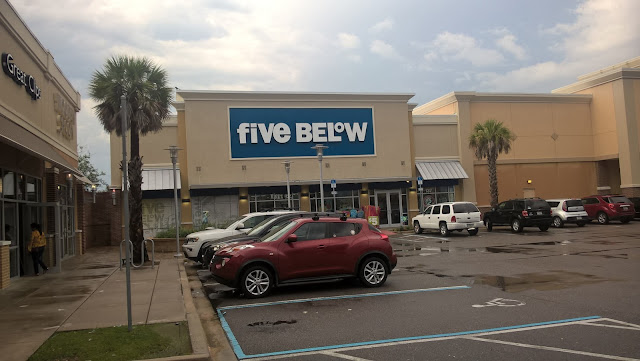 An approaching shot of the store shows it's shiny new (painfully generic) facade, as well as an almost copy-paste string of cars in front of it. 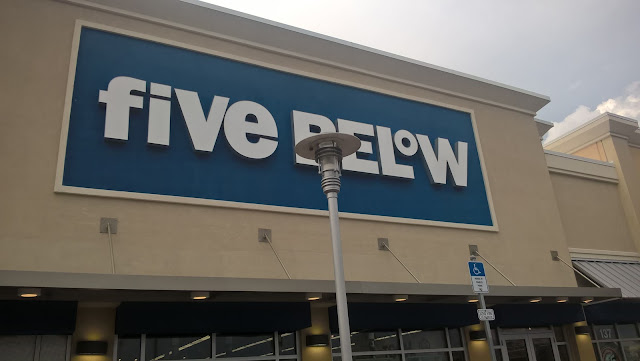 Five Below is an interesting store to me- one that I think sort of flies under the radar. I'm not sure if it's the company overall evolving over time, or maybe it's regional, but Five Below has gone from, in my childhood, an upmarket Dollar General, to well... closer to a modern 5&10 store, swapping the "cents" for "dollars". Which I guess is also what Dollar General is... but I think Five Below embodies it better. 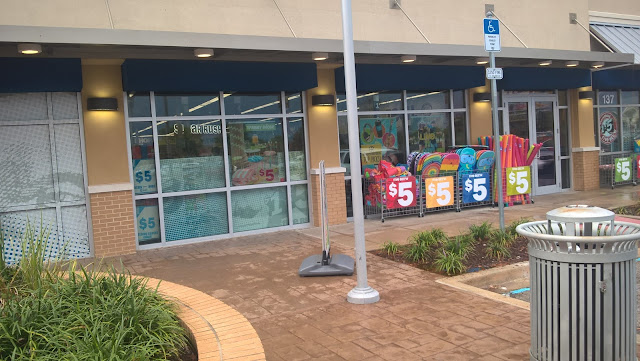 At this time Five Below was selling a bunch of pool items outside the store- yes, in September! The beach never closes in the sunny South. 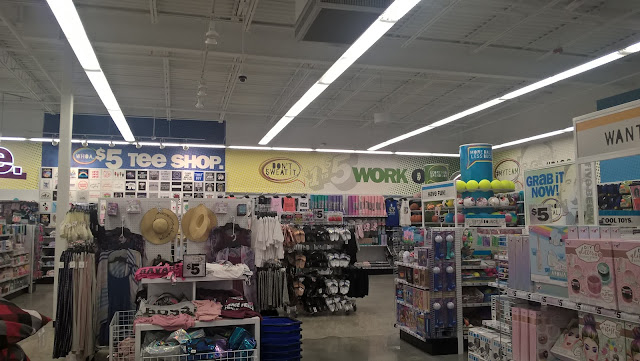 Going inside, we see Five Below's unique decor. I'm not sure how I'd describe it- It has shades of the "Faux Seedy" aesthetic that a modern Spencers attempts, but also reminds me of those over-designed "super cool" journals with tiny locks on them you'd get from the Scholastic Book Fair. Someone else has got to remember those.

In this shot we can see a lot of cheap clothes, sun hats, and sandals. Definitely geared towards stereotypical "girls stuff". 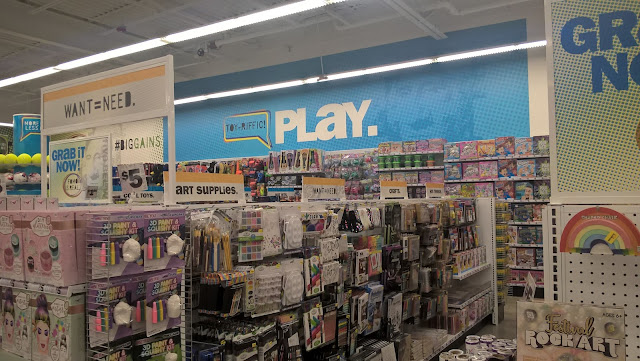 Even the art supplies aisle is becoming encroached by pink. It's a bit perplexing, really. They're art supplies! 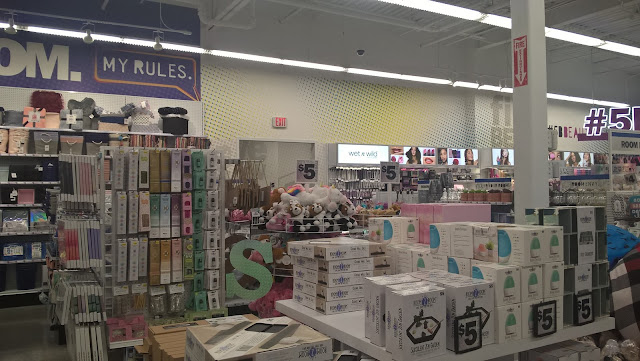 Looking this way we can see the start of a rather decently sized makeup section in the background, as well as more stuff coated in pastel. This store really had a lot more makeup and what I'll loosely term "girly stuff" than I honestly expected, since I still classed Five Below as the "upmarket Dollar General" I remembered it as. No cheap Star Wars Nerf guns here. 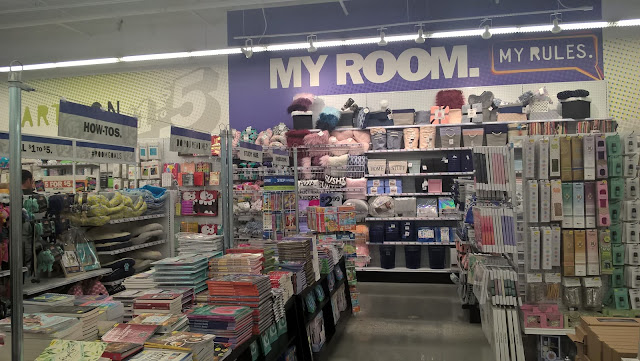 A small books section and some room decor. 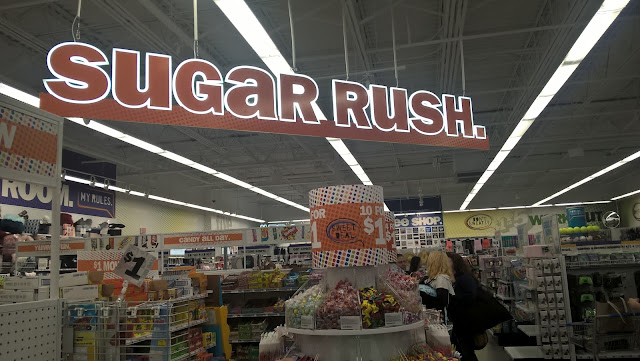 The "Sugar Rush" section, or, in English and not what corporate big wigs think is "trendy", the candy section, was a nice feature. More stores need candy sections, and this is also what helped spark the "modern day 5&10" store feel for me. That and them finally adding $10 and below items after this, literally making them a $5&$10 store. 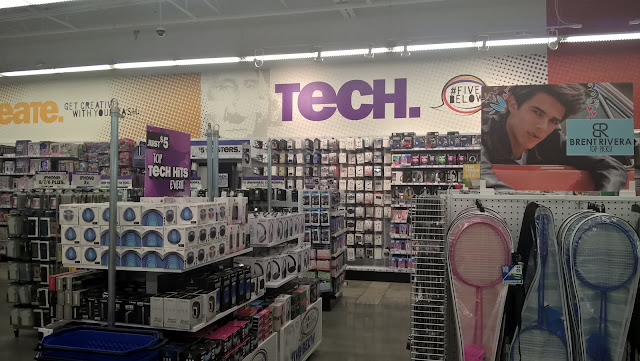 The tech section here has always interested me. I know a $5 bluetooth speaker or headphones won't be good, but just how much bluetooth speaker can you really get for $5? Unfortunately I go to Five Below almost never, so I've never been able to sate my curiousity. 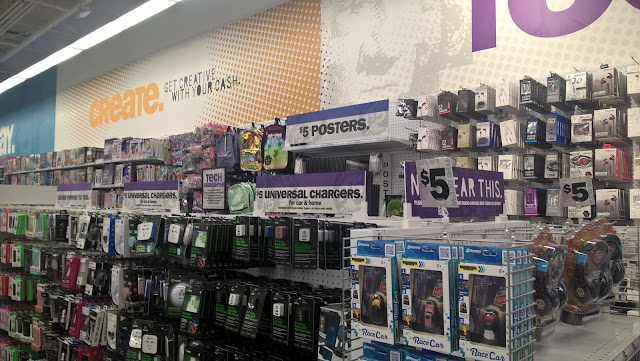 The charging adapters and cable section stands guard over the posters on the back wall. 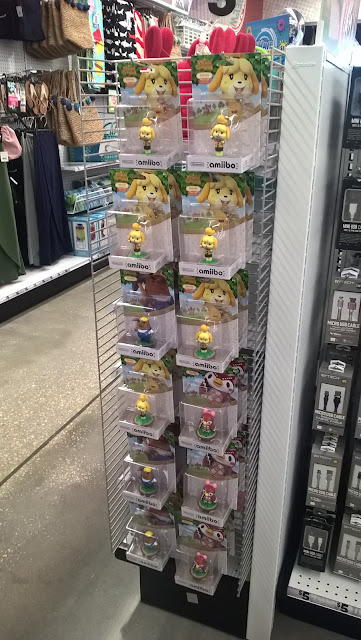 Scott The Woz's recent amiibo festival video remarked about how the Animal Crossing amiibos quickly piled up in discount bins and discount stores due to being unwanted. He even name drops Five Below saying "All I did was go to Five Below, a Gamestop, and a dabble on eBay" and he has almost all of them. Ironically, I can see at least three copies of one he was missing in this photo. Should have gone to Florida, Scott! 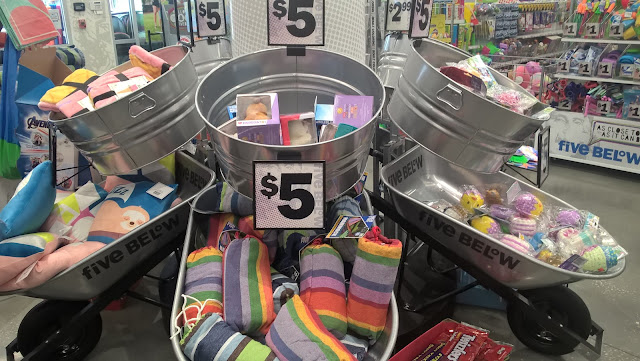 I wonder if they'd sell me one of these wheelbarrows. Or if they're actually functioning wheelbarrows, for that matter. 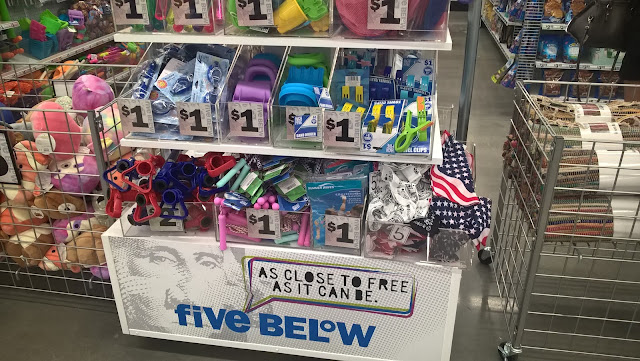 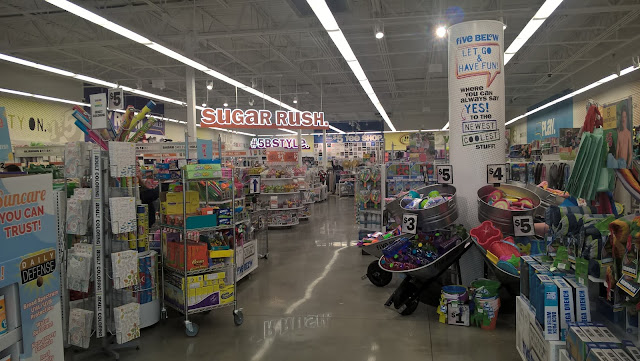 This overall shot shows just how busy the store is. While I don't remember the store as being particularly crowded, there's definitely a lot here. 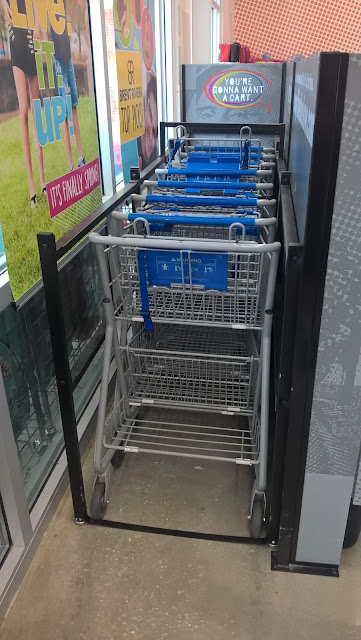 The carts here are fairly generic, double-baskets made by I think Technibilt. Amazingly, one has already lost it's handle cover despite this place barely being in business a couple months. 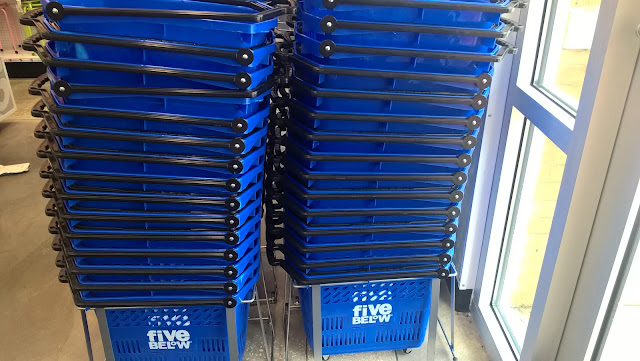 The baskets here are that weird modern type that I never really like. The old design is just... better in almost every way to me. Unlike my current sleep schedule- it is 2:05 AM as I write this, and I am running on pure inspiration and Pokemon speedruns.

Anyways, I hope you all enjoyed this look at a newer store, and a story of growth, in these days surrounded by retail decline.
Posted by Cape Kennedy Retail at 2:09 AM