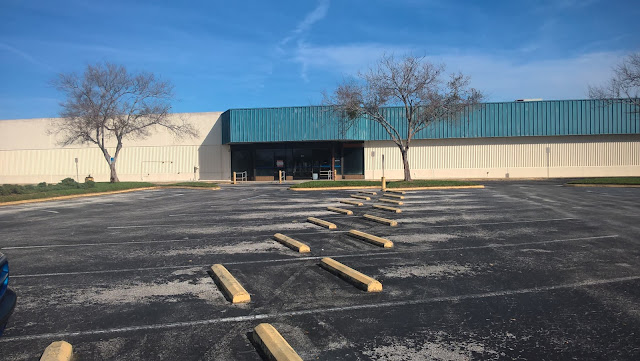 Oh Kmart, everyone's favorite ailing discount department store that most people thought already died. Brevard County itself is actually entirely Kmart-less. Not a single one still operates anywhere up or down the county, with the closest store being Indian River County's singular remaining store in Vero Beach. The last Brevard Kmart closed in Palm Bay in 2014, and was rather swiftly replaced by a U-Haul that happily occupies the space. Many of Brevard's other Kmarts however, died much earlier and have suffered far less kind fates. Many went in early closing rounds in 2002, 2003, and 2004.

In Titusville, it has sat largely vacant. A parking lot for the occasional tractor trailer, if anything. Last I heard, it was undergoing internal gutting for an as of yet unknown project. Palm Bay's other Kmart has been split in twain, between an Ace Hardware that closed up shop and a Roses, which if anything can be described as a sickly comedic parody of Kmart itself, being a dingy discount department store that has somehow managed to find success in the model.

Rockledge's store follows a similar story to Titusville's, sitting completely vacant to this day. However, not just this store is dead: it's entire plaza is pretty dreadful. The closest thing to an anchor it possesses is a Bealls Outlet in what was long ago an Eckerd Drugs, which opened to compliment a Florida Choice that never opened (Kroger nixed Florida Choice before it's opening day), which quickly became a Goodings, before closing with the rest of the chain. Since then, it's never had a tenant, save for a small part of it being taken up by Brevard Health Alliance. The rest of the plaza is fairly empty, only a few scattered, quiet, largely non-chain tenants.

Looking to our right, we can see the very edge of the plaza, hiding behind trees. This shot also showcases the empty state of the parking lot- the entire area around Kmart was actually sort of marked off with cones, indicating that this plaza apparently has no use for surplus parking. 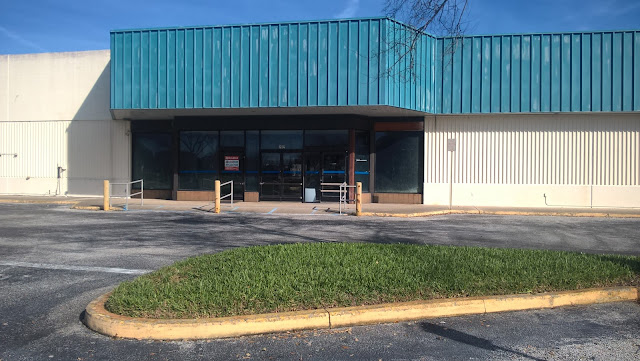 Welcome to Kmart- rusty, faded, and with a suspicious smell that makes you reach for the respirator. I'm not sure who painted the facade this color- it's certainly not a Kmart color, or at least any I know of, and I don't believe this space had any tenants after Kmart, except for maybe a few raccoons. Either way, this paint has been here long enough to patchily fade back to a sufficiently weathered state, so even if it's not original, it looks the part. The entrance here, despite being shaded by the facade, has still begun to fade, and the pylons out front have aged significantly worse- flaking paint and having turned a chalky shade of their original colors. 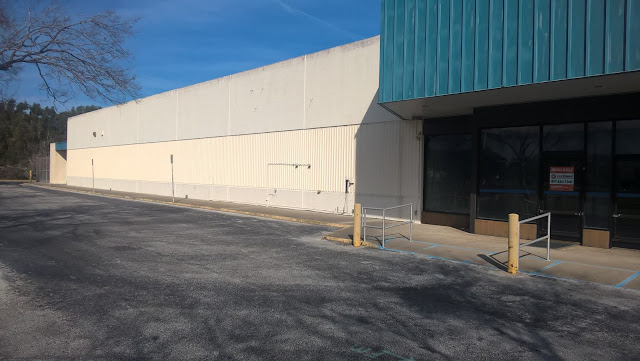 Before we get our (best attempt) at a look inside, lets swing house left and look down the other end of the store. Not much but a long, rather monolithic wall and the garden center at the very end- but we'll revisit that later. 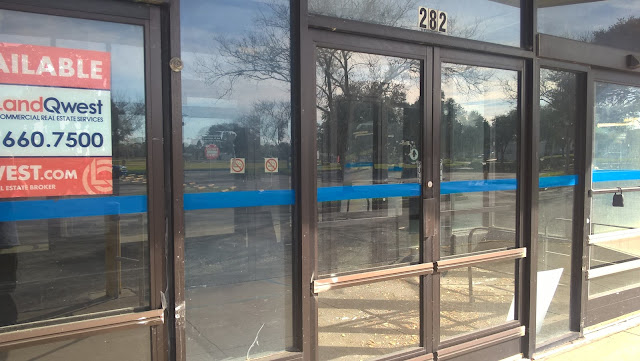 As we inch closer to the interior, we'll take a quick look at the (sadly) locked doors, which have by a stroke of luck not gone totally opaque from over a decade of mold and dust. Not that the interior is short on either of those, as you'll see, but it seems to have avoided the glass. I'm not sure what the blue striping is; between this and the exterior paint job, this store really has the market cornered on
m y s t e r i o u s  c o l o r s.

......yeah. The interior here is rough. The abandoned Sears and Publix/Food World that share a plaza elsewhere in Rockledge have been abandoned for what is likely far longer, and even they didn't come close to the dreadful state that this place is in. Even peering through the glass I felt like I should have been wearing a particulate mask. Just like Kmart itself, this former location is moldy, forgotten, and falling apart more and more by the day. I imagine even if the surrounding plaza was booming, this space would likely have to be extensively remodeled or flat out demolished due to it's current condition. 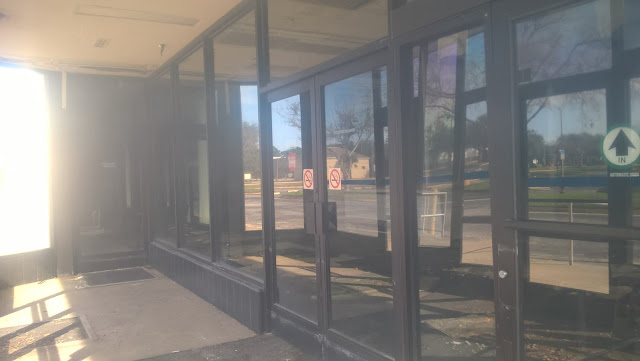 The larger interior space seems to have taken up the slack for the vestibule, however, as it's in pretty good condition. Relatively, it may as well be shined to a polish. 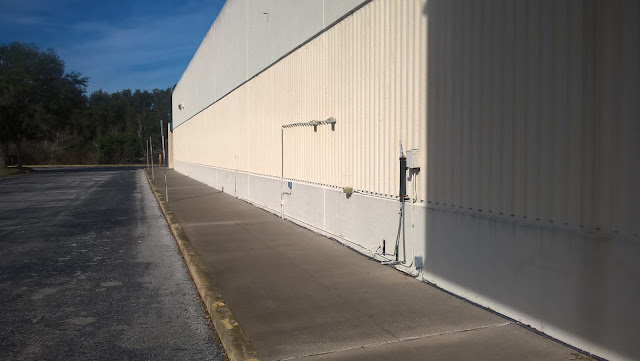 The edge of the entrance facade creates an eerie shadow as we look down towards the garden center. In happier days, there likely would have been "GARDEN CENTER" lettering somewhere along here, but it's long been removed and I can't even find mounting brackets that seem to match that lettering. 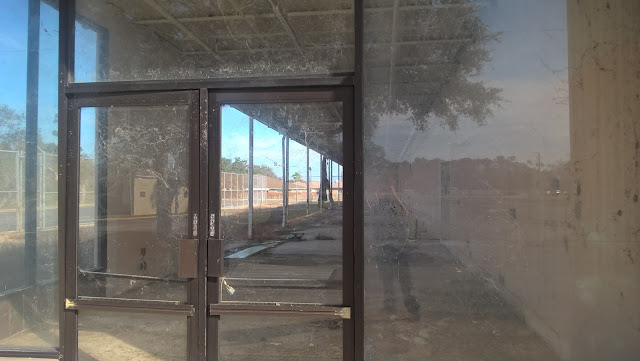 If the interior looks the most like a horror movie set, then the garden center feels the most like it. A rusty skeleton of metal support poles and rusty brown chainlink, sprinkled with windswept debris and weeds. 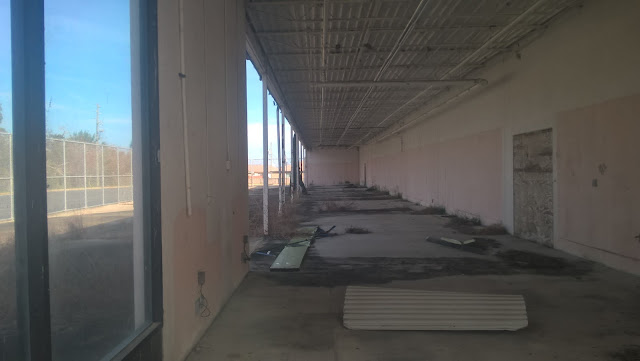 Now this looks like an abandoned wreck- plywood over the entrances, miscellaneous, vaguely industrial looking metal debris, and my favorite- unidentified large, dark stains on the concrete ground. I'm assuming the debris was either blown in, or left over from some form of interior/exterior gutting, as I couldn't find see an open entrance anywhere, though I didn't check around back. The roof is actually in pretty good condition, all things considered. All the photographs I've seen of former Target garden centers, abandoned many years later and usually still attached to active stores, have looked far rustier and crumbling than this. 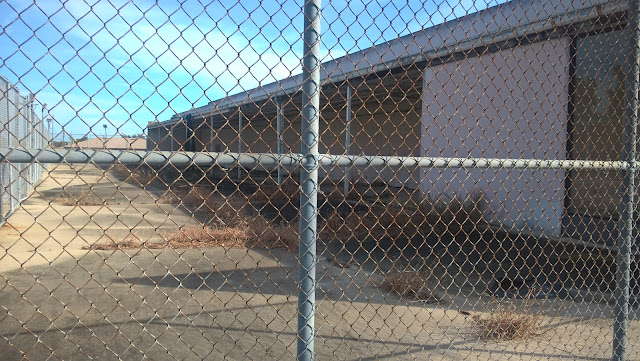 No more flowers and ferns, nothing but brown, (presumably) dead grass is available at this garden center today. I'm curious how it ended up this shade, when I see dead grass it's mostly a hay-like tan, not an almost weak chocolate brown. Matches the rusty chainlink rather well, actually.

To round off this post, we'll take a quick look at the only remaining "major" tenant in Barton Commons- a Bealls Outlet, swallowing up a former Eckerd Drugs space. This is also where the name for this post comes from- when I was just about done photographing the plaza, a dude came out of this store and asked a few different people, including myself, for a few dollars, which he assured he needed for non-sketchy reasons. I mean, very likely that he was a few bucks short on his purchase- but still, it's the weirdly specific denial trope in action. I didn't actually have my money on me at the time, and wasn't intending to go back and get it for this, so I mumbled some kind of excuse to his question, and went on my way.